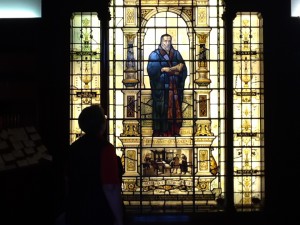 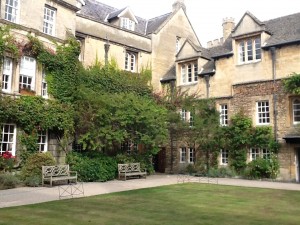 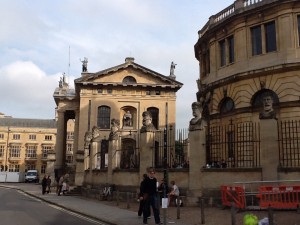 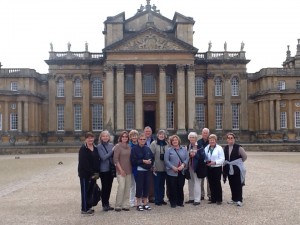 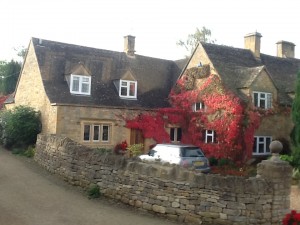 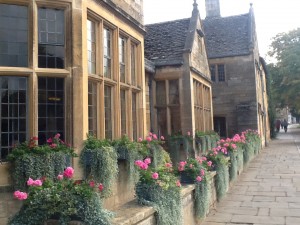 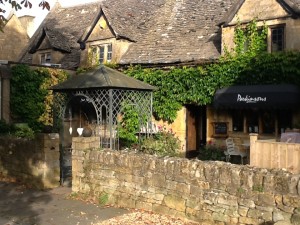 Today we left our Elizabethan Hotel near Stratford, and drove a short way into the Cotswolds. This area is one of England’s favorite destinations, famous for hundreds of honey-colored limestone villages in beautiful rural settings. We stopped in a medieval village called Broad Way, and all loved walking the streets and shopping a bit.

It was a foggy morning, and as we walked the sun came streaming through.  The guide and I came upon an old Hotel where Oliver Cromwell had stayed and where Charles I met with his Royalists followers during the Civil War during the 1600’s. We went inside to see if they had enough rooms for a future tour group, and they did. We’re going to keep this Hotel in mind for the next time we come back to England.

Then we drove to Blenheim Palace, a large country house near Woodstock village in Oxfordshire, England. The palace is one of England’s largest houses, built between 1705 and 1724. It was built by John Churchill, the 1st Duke of Marlborough who was given the land because of his military triumph against the French at the Battle of Blenheim. The Palace is also known as the birth place of Winston Churchill. His uncle was the Duke of Marlborough during that day and time, and Jennie Jerome, his mother, and Randolph Churchill, his father, were attending a shooting party for the weekend. Jennie went into labor and surprise, surprise, little Winston was born prematurely. Following  the palace’s completion, it became the home of the Churchill family for the next 300 years. Today it is open for tourists, weddings, and all kinds of concerts and parties, as the present Duke tries to maintain Blenheim for the future. He and his family continue to live in the northern roped-off section of the palace, and the rest of it is open for visitors. One of the most spectacular features of Blenheim is the extensive grounds and parks that surround the property. Many of the locals come to walk their dogs and grab a cup of tea in the Tea Room for a weekend stroll. It’s some of the most beautiful grounds in all of England.

Then we drove on to our Hotel — The Randolph, right in the middle of downtown Oxford. After checking in, we went on a walking tour with Sarah, our guide. We had a 3:00 appointment to see a famous little-seen portrait of William Tyndale, who was a ‘fellow’ (professor) in Hertford College. The portrait is in the eating hall where the students sit today, and it is rarely open to visitors. However, our guide was able to talk her way into the college allowing us to view it. We were also allowed to see a stained glass window of Tyndale as well, which was incredibly beautiful.

We are learning how much we owe to William Tyndale. He was the first to translate huge sections of the Bible into English from the Hebrew and Greek, and he was able to print his Bible while hiding in Germany in early 1500’s. This was all in direct confrontation to the Catholic Church. It was against the Roman Church’s law for anyone but a priest to read the Bible or to interpret the Bible. He wrote “We had better be without God’s laws than the Pope’s.” He also said, “I defy the Pope, and all his laws; and if God spares my life, ere many years, I will cause the boy that driveth the plow to know more of the Scriptures than thou dost!” Tyndale felt so strongly that every man has a right to read and understand the Word of God, and that no church or priest has the right to stand in the common man’s way. In 1535 he was arrested by church authorities and jailed for a year. Eventually he was strangled and burnt at the stake. The 54 scholars who worked on our King James Bible used approximately 90% of Tyndale’s Bible for the New Testament, and about 75% for the Old Testament. Within four years after his death, four English translations of the Bible were published in England, including Henry’s official Great Bible. All were based on Tyndale’s work.

Tomorrow we’ll be walking around Oxford some more, as we finish our last day in England.