This morning we visited the Galleria Dell’Accademia and viewed some magnificent paintings.  One was Titian’s Pieta which was a rare subject for him.  Titian worked on paintings for a long time and returned again and again to them.  Another one was Tintoretto’s The Miracle of the Slave – a painting full of energy, color and dramatic action.  St. Mark is the patron saint to the city of Venice, and it’s a story tied to Mark.  Then we saw Veronese’s dramatic, Feast in the House of Levi, originally titled The Last Supper. But when the Church and Inquisition saw it, they were appalled at it because it looked more like a banquet than the solemn Last Supper event.  Veronese is painting during the Counter-Reformation and the Roman Catholic church needed to push forward Catholicism and art was major in doing that.  If art is distracting, then it’s not in the service of the Church.  How does Veronese deal with it?  He changes its title.  The Church was satisfied. 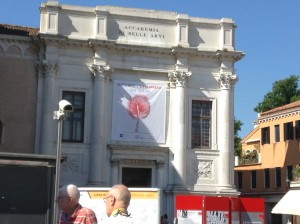 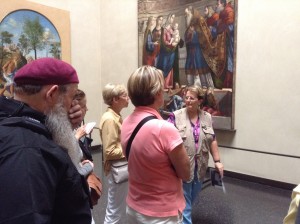 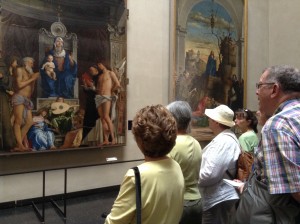 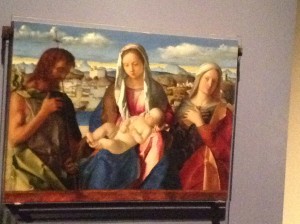 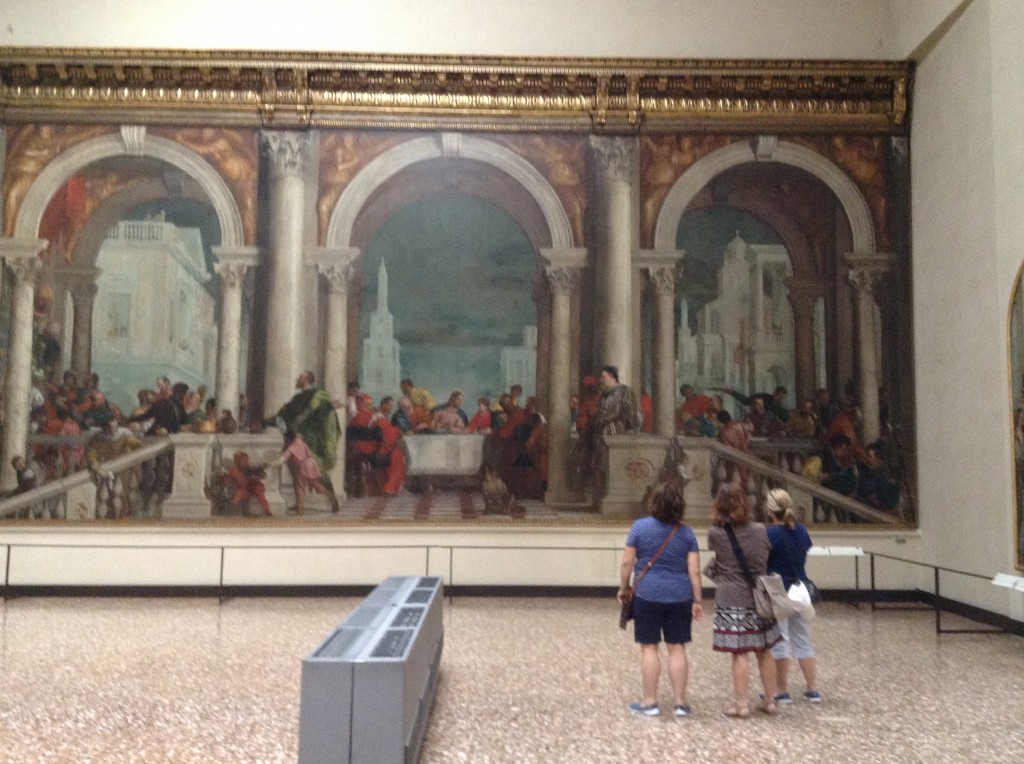 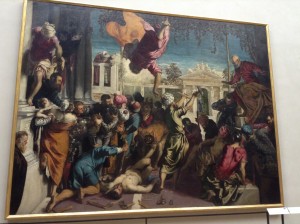 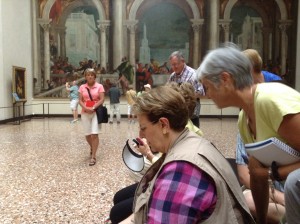 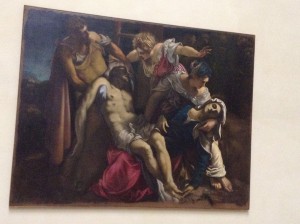 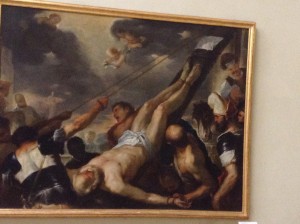 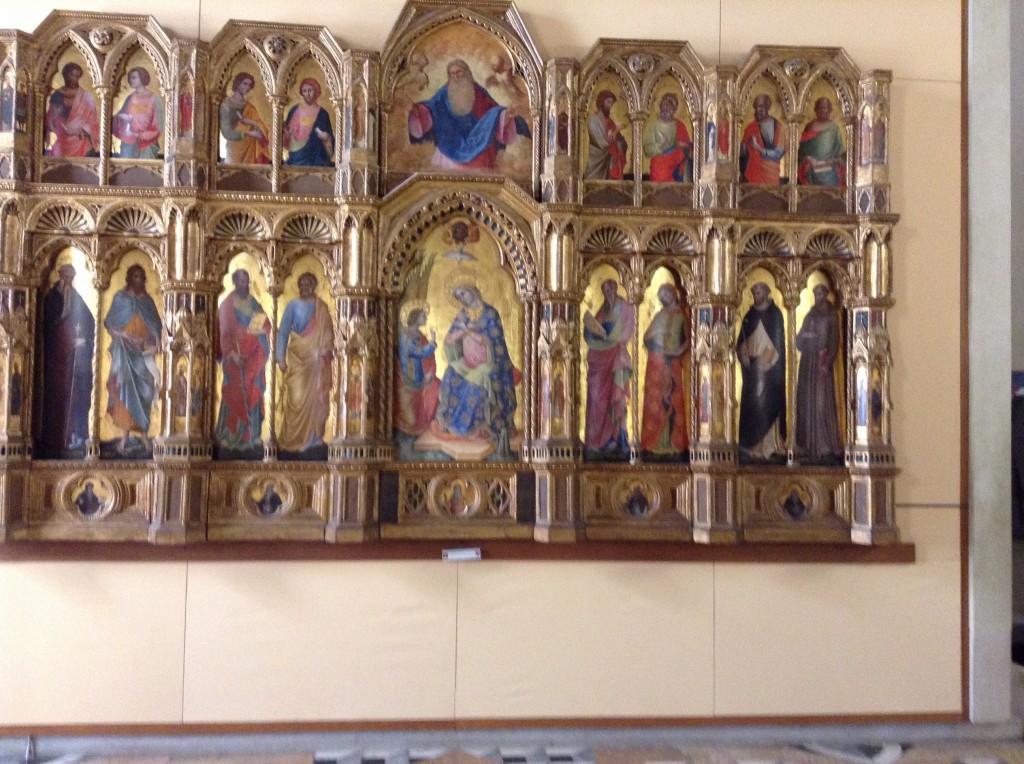 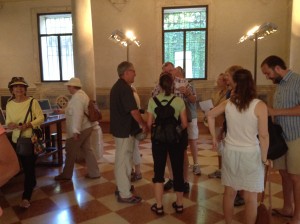 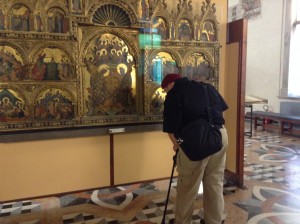 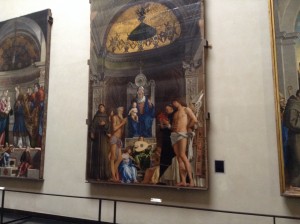 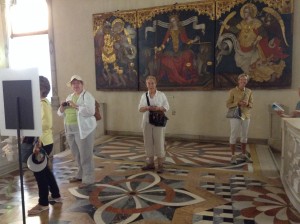 Lunch on the Canal 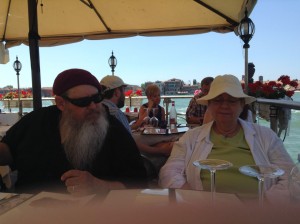 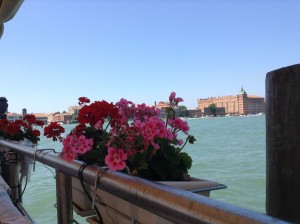 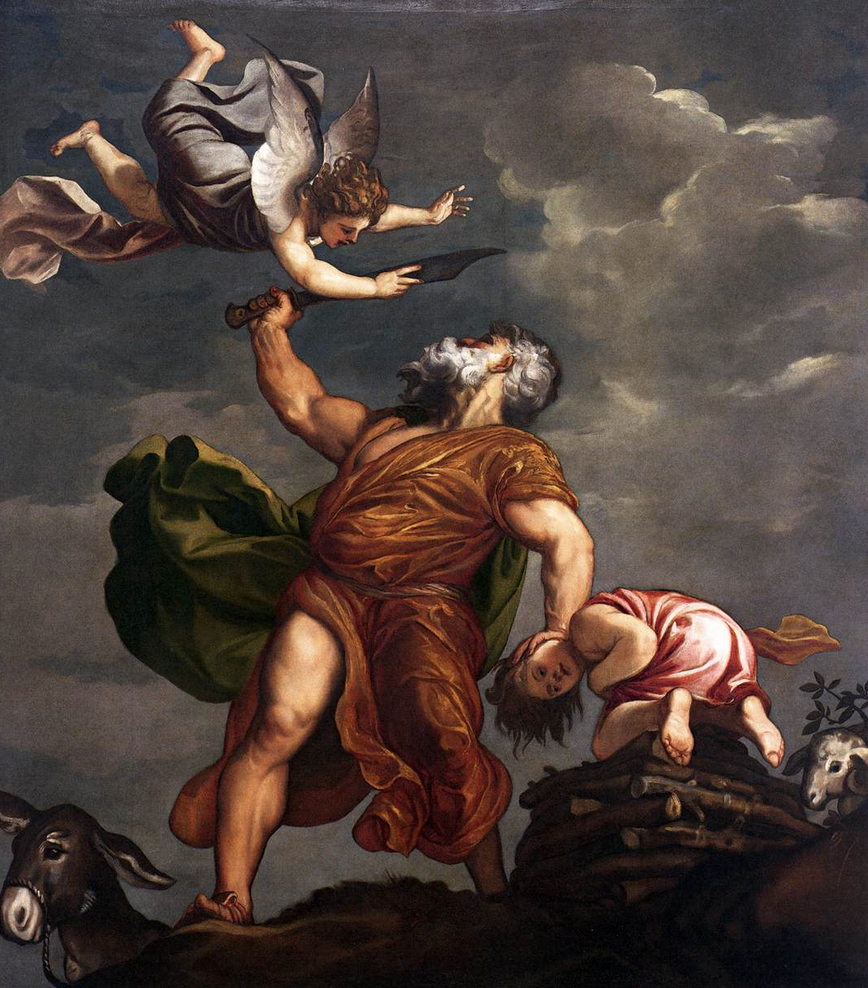 Here we are waiting inside the Santa Maria Della salute to see Tintoretto’s Marriage at Cana painting: 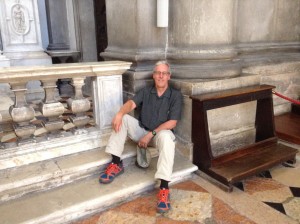 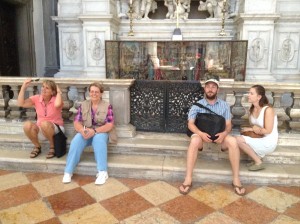 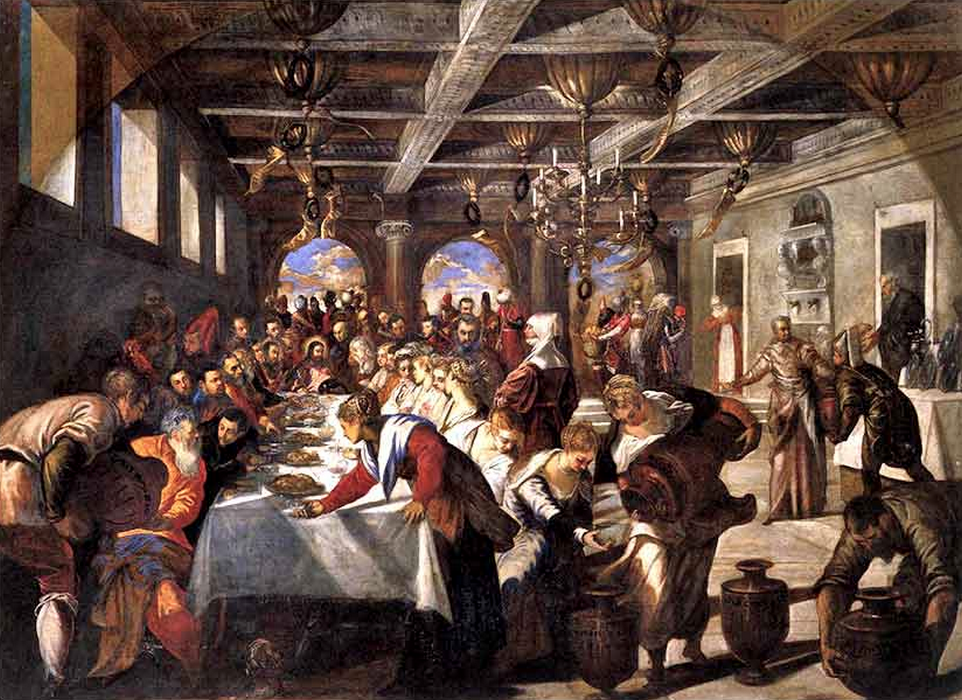 We then visited the Scuola Grande di San Rocco which has Tintoretto’s paintings on ceilings and walls over two floors.  One painting in particular made the group pause and study carefully – The Crucifixion. It’s 36 feet long and the artist set out to elicit maximum emotion from the views of his religious works.  He succeeded. 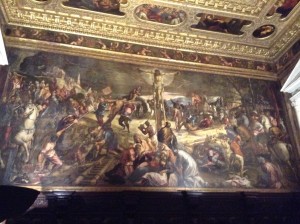 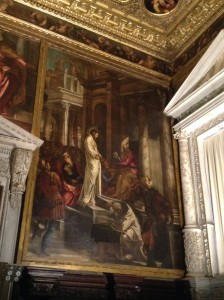 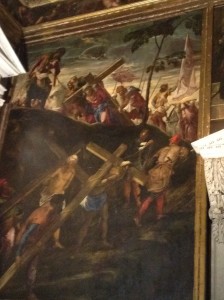 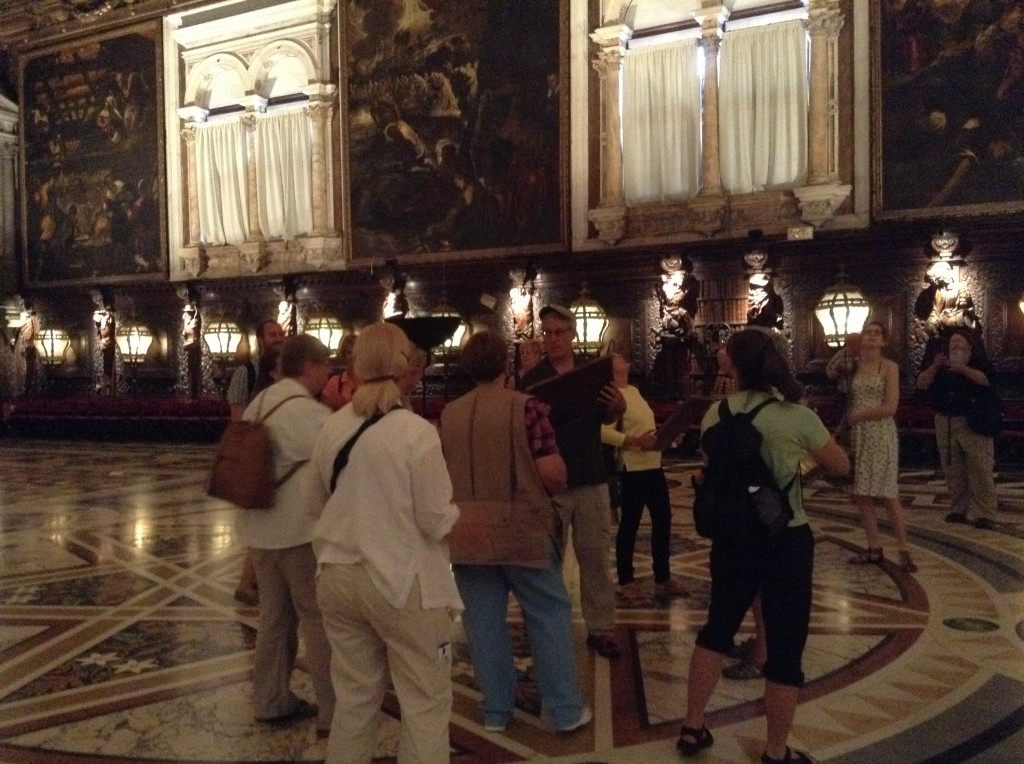 Near by is the Church of the Friars which contains some of the most brilliant pictures in any Venetian church.  Inside is the biggest altar piece in Venice – Titian’s magnificent Assumption.  Also in the church is Titian’s Pesaro Madonna. 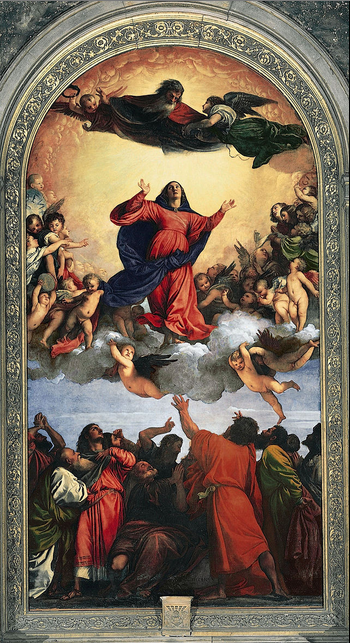 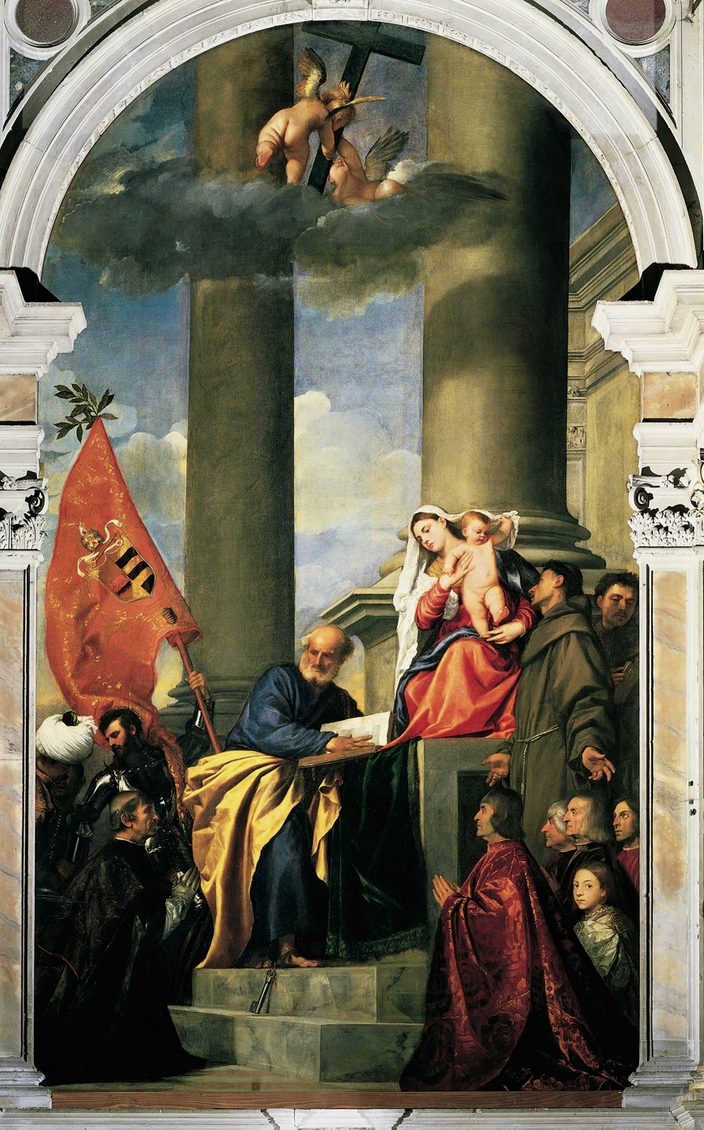 The weather had been fabulous, and the crowds have not been a factor when we visit these churches.
Tomorrow we are taking a train to Rome.