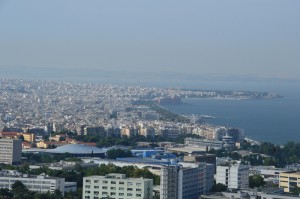 Today we explored the city of Thessaloniki. Thessaloniki was founded in 315 B.C.E. and during the Roman period, became the second largest and wealthiest city of the Byzantine Empire. A very important strategic port for commerce between the east and west, the modern city secretly houses ancient sites in the middle of some of the busiest and most trafficked areas of the city. We learned that this area was called Macedonia in the ancient times and near this city, Alexander the Great as born (in Palla which we will visit tomorrow), and also outside the city, the famous philosopher, Aristotle, had his school where he taught Alexander. The Byzantine Era stretched over 10 centuries until 1430 when the Turks conquered this area (also conquered Constantinople in Turkey and renamed the city Istanbul). For almost five centuries, the Turks ruled here in this area until 1912. The northern part of Greece was the very last to gain independence from the Turks and finally joined the rest of southern Greece in 1912. Interestingly enough, you cannot find any (except a few remnants) of the Turks, there are no remaining mosques in the skyline, only a few ancient Turkish bath ruins and some decorative influences in the churches. The churches were built during the Byzantine empire during the 9th-11th centuries and after but when the Muslims came, they surprisingly did not tear down these churches but just covered up the figured mosaics (which ironically preserved them for future generations). What’s interesting is that after 1912, all the Turks living in the city were forced to go back to Turkey, and any Greeks living in Turkey were forced to come back to Greece (there are only a few exceptions). 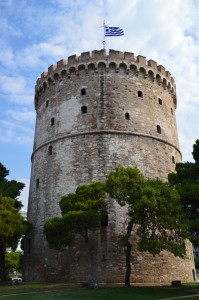 During the 1st century a Jewish colony was established in the city and became an early center for Christianity. Paul preached in this city on his second missionary journey. He spoke in the city’s synagogue, and laid the foundations for a new Christian church to be built there. The earliest known letter by Paul was written to the early Christian church in Thessaloniki and is called First Thessalonians. The authorship of this letter is pretty much undisputed by scholars unlike other letters in the New Testament.

Our group loaded the bus around 9:00 am and took a bus tour of the city with a new local guide, Patti, (who was fabulous!). We stopped at the ancient White Tower first, a monument and museum on the waterfront of the city of Thessaloniki that was built during the Ottoman rule as a prison. During that time it was not called the “White Tower” but the “Red Tower” because of the methods of torture practiced on the prisoners. In 1912, it became renovated and was adopted as a symbol of this city. 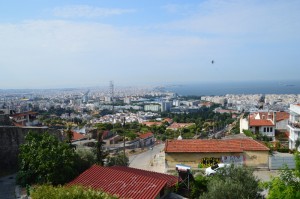 Next we drove through to the Upper City where a 4th century-old Roman wall still stood from the ancient site of the acropolis. We all got a gorgeous view of the city that stretched out before us. The harbor was grand and we were informed by Patti that the red roofs of some of these renovated neighborhoods delineated the upper city from the lower city (the old from the new). There are building restrictions in the upper city that has to adhere to the traditional style of the Greek architecture from the early 20th century and it is quite a charming and quaint contrast to the lower city, which is all compact with high rises and flats. 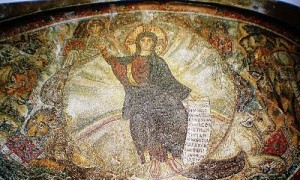 On our way to visit our first church, Patti casually informed us on the bus that the Upper City houses a modest but ancient early Christian church that is unique because it has a mosaic depicting Jesus without a beard–only 1 other city in the world has a similar mosaic from the same time period located in Ravenna, Italy. So we made a lovely excursion off our itinerary to visit the Osios of David. But getting to the church, we had a small taste of the beauty of the Upper City while walking to the tiny ancient church overlooking a gorgeous view of the city and harbor. The church was built in the 6th century and even though the remains of the church that we saw was barely a room, we were only seeing what was left of it. The symbolism on this mosaic was the most interesting part of the church. Patti showed us the beardless Jesus who wore a two-colored gown, the inner layer was red symbolizing divinity, and the outer was blue representing humanity. A gold banner crossed his chest which symbolized prophecy. The four Gospels were shown  encircling Jesus by the 4 beasts: the lion for Mark, the ox for Luke, a man’s face for Matthew, and an eagle for John. The prophet Ezekiel was depicted on the left side of the mosaic underneath Jesus as was Habakuk on the right. Below the prophets were the it had the four rivers of Genesis and Revelation flowing into the Jordan. There was a scroll pouring out of Jesus’ hand which the guide told us symbolized the 2nd coming of Jesus. 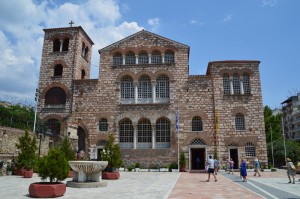 After this special site, we drove down to the lower city to visit the two main churches of the city, Church of St. Demetrius (named after the patron saint of Thessaloniki, and the Agia Sophia (dedicated to the Wisdom of God), both Byzantine Churches. Church of Demetrius was built in the 4th century and after a fire destroyed it, eventually reconstructed in the 6th century which is what is mostly seen today. 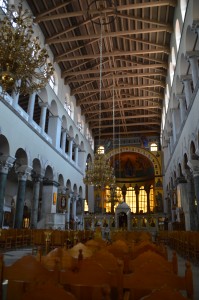 The church of St. Sophia was built in the 7th century as a smaller model of the Hagia Sophia in Constantinople. It has been converted into many things including temples, and mosques until 1912 when it was renovated into a Christian Greek Orthodox Church again and is used for modern services each day and each week. 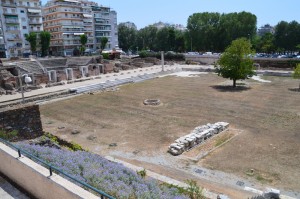 After lunch, we made a quick stop to see the largest Roman Forum in the area and then spent the rest of the day at the Archaeological Museum. Here, most of us toured with Patti to learn about their permanent collection of gold. 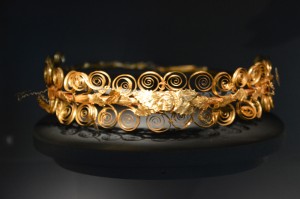 Most of us were not aware that Macedonia was known for the abundance of gold in the ancient world. So much gold was available here, there has been so much uncovered from the early 4th century B.C.E. to the later part of the 4th century C.E., mostly during the Roman period. On display were lots of jewelry, gold-leafed wreaths, athletic gear, armor, wine urns as well as lots of other artifacts. There was so much wealth here, it was not uncommon for women of the period to decorate their own clothes with woven gold-leafed motifs! It was pretty spectacular.

Tomorrow we rise a little earlier to make our way over to Pella, where Alexander the Great was born, and start the trek south towards Meteora where we will stay in the mountainous regions of Kastraki or Kalambaka.