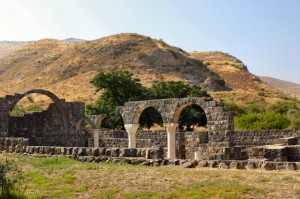 Kursi was our first place for the day this morning. It’s just down the road from our Hotel in the Golan Heights (on the eastern side of the Sea of Galilee). This is the site where Jesus cast the demon (Legion) into the pigs and they went down the side of the cliff. Kristy did a beautiful explanation of this healing. 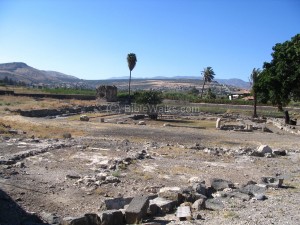 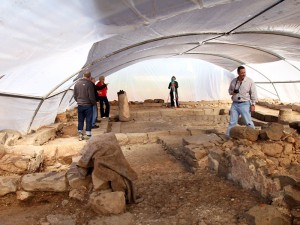 Eitan took us to the newly excavated site of Magdala, where Mary Magdalene was from. Archeologists are just now finding incredible things at this site including a 1st century synagogue that Jesus most certainly taught in, and three mikvehs (Jewish ritual bathing places: one for the community and two in one house, which means a very rich man lived here). Every time Kristy and I (Kathy) come back each year, there are new additions to the site to look at which is so exciting. It’s also interesting to see a live dig in progress and to witness how much time it takes to methodically dig through each layer of history to discover the special remnants of buildings thousands of years old. Pretty incredible.

Next we drove through the Arbel Pass, a pass between two mountains overlooking the Lake. This is the pass that Jesus would have traveled from Nazareth and the Valley of Jezreel to the Sea of Galilee and villages that surround it, (most likely on foot!). 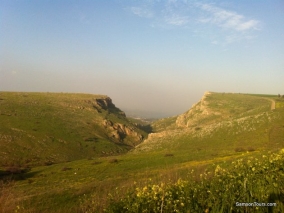 The pass was filled with mustard seed bushes this time of year, and it’s in between high cliffs on both sides. Eitan said there were villages along the way with synagogues that showed the Jewish presence there. Eitan’s two sons are named Arbel and Nitan (which are the names of the two cliff faces), and Eitan means the water in between.

Then we drove through the Valley of Jezreel, through its abundant crops of wheat and barley until we arrived at the turnoff to Nazareth. 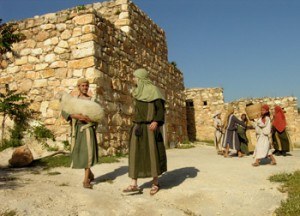 Today Nazareth is an enormous sprawling city so it’s very difficult to reconcile the urban city center with the tiny village we all associate Jesus youth with, but here, we visit the Nazareth Village that is located within the city. 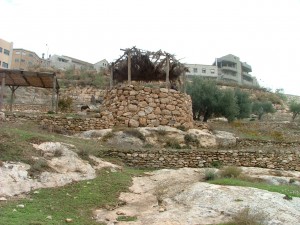 It’s a small oasis but it clearly gives us a feeling of going back in time. The village of Nazareth in Jesus’ day had probably only 500 people, but today there are 70,000 mostly Arabs and Jews living there. It’s a thriving city on the hillside. Our guide whose name was Tali took us on a tour of the place. I asked her where her name came from and she said from “Talithi cumi”,  “Little lambkin, I say unto thee arise,” from the healing of Jairus’ daughter. This city has a man-made replica of Nazareth in Jesus’ times run by Messianic Jews. 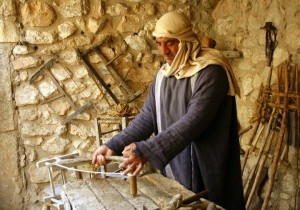 Tali showed us crops and explained how they were grown in Jesus’ day. We saw a shepherd with his sheep and goats, a wine press, an olive press, and a first century carpenter shop and home, and finally a first century synagogue. After her tour, she took us to the place where they served us a first century dinner. We were just starving, having been up early in the morning, so we were excited to have a lunch cooked by these Messianic Jews. (A Messianic Jew is one who has accepted Jesus as their Saviour). This dinner was the type of meal that Jesus might have eaten, with lentil soup, cooked over the fire pita bread, several dips to put on the bread, barb-b-cue chicken, and apples with date paste. It was delicious! 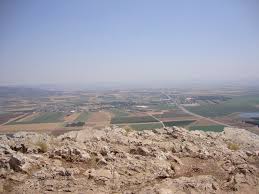 Our next stop was called Mt. Precipice, supposedly where Jesus was taken and almost thrown over the brow of the hill after his synagogue declaration that he was the fulfillment of Is. 61 and its Messianic prophecy. Again Kristy delivered a talk on this story, as the group looked around the hillsides with a 360 degree view. It was just spectacular!  Then we drove back to the eastern side of the Sea of Galilee to get ready for dinner.

It is hard to believe that tomorrow is our last day of touring.  We’ll be leaving the Galilee and heading towards the Mediterranean Sea visiting our last stop, Casearea Maritima.