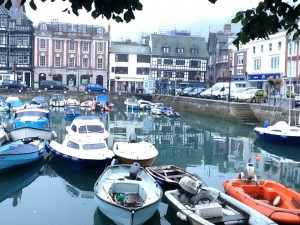 This morning dawned with mist over the River Dart. Looking out our Hotel windows we all had a view of the ferry crossing the river, sailboats in the harbor, and sea gulls fishing along the water. Although the ferry was right below our rooms, it was pulled by two cables instead of an engine, so it was virtually silent, which was very nice. From now on, everywhere we stay, a full English breakfast will come with our room. In London we were only given a little fruit, cereal, and breads, so we are looking forward to eggs and bacon and more variety. 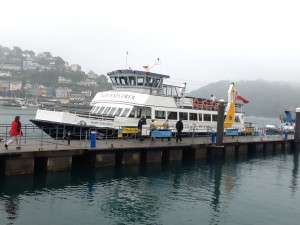 Our day really began about 9:30 as we boarded a small river boat ride up the River Dart to Greenway House, the home of Agatha Christie and her husband, Max Mallowan.   Ms. Christie is well known for her mystery novels about detectives Hercule Poirot and Mrs. Marple. Greenway House is located high up a wooded hillside with beautiful views of the river. 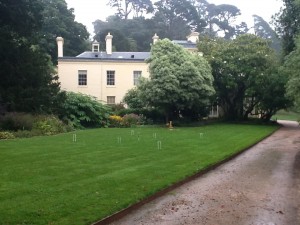 The home was built in the 1500’s and was part of property owned by Sir Walter Raleigh’s brother. T 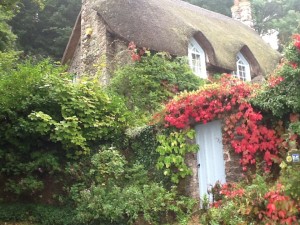 he property Ms. Christie bought held huge woodlands, acres of riverfront and gorgeous walled gardens. She and her husband lived their with their children until their deaths in the late 1970’s. In 2004 her daughter Rosalind passed away and the heirs eventually gave the home to the National Trust to be preserved as a museum to Dame Agatha Christie.  This beautiful home was one of the favorites for everyone. Not only did it feel homey and intimate but it is situated in such a natural environment with the gardens, the river, the sea close by, it really made an impression on us that we weren’t expecting to find. 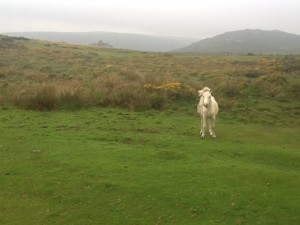 After our tour of the house and gardens, we drove the bus to the Dartmoor moorlands, an area protected by the national parks in England. The vast hills were dotted with exposed granite hilltops, known as “tors,” with specific vegetation that only grows at this altitude and this type of rainy weather. The moors figure in many famous author’s stories including Arthur Conan Doyle’s “Hound of the Baskervilles.” The moors have many differing kinds of wildlife and people come from all over to hike the trails and take pictures (these are different then the north-eastern moors of Charlotte Bronte’s novels, etc.).  Years ago these lands held 30,000 small wild ponies but now there are only about 3,000 left. Many were rounded up and used to put to work in the tin mines nearby. 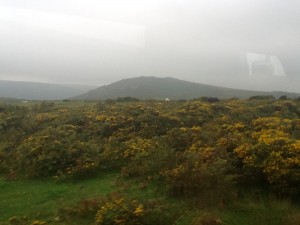 These moors are surrounded by thick layers of peat (decaying vegetation), and the rain is usually absorbed quickly and distributed slowly, so the moor is rarely dry and dangerous bogs or mires can form unexpectedly. Farmers are allowed to graze their cattle on the moors and we saw hundreds of them dotting along the hillsides. In the lower lands surrounding the moors are green fields filled with sheep grazing everywhere. Hedgerows fence off each farmer’s field and the roads for the bus and cars were extremely narrow. We often had to stop and back up to allow a larger truck or bus to go by since these roads are so old, they are not wide enough for 2-lane traffic. 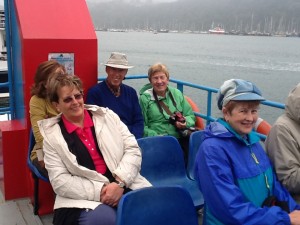 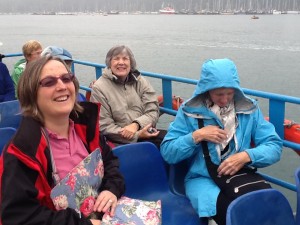 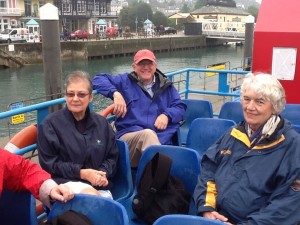 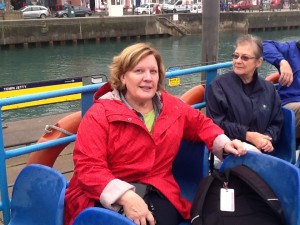 Our plan tomorrow is to make a long drive west along the Cornish coast to visit Tintagel, the traditional ruins of the castle of King Arthur. We will see how the weather goes.