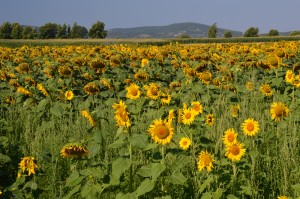 Early this morning, we loaded our bus for a trip to Philippi, which was a two hour bus ride south. The drive was spectacular. We drove through the breadbasket of Greece, with rolling hills of corn, wheat, rye, and gorgeous fields of sunflowers everywhere. All this was set against high, tree-covered mountains that looked as high as the Rockies. We learned the highest mountain in Greece is 4,000 ft but when you consider that the islands are sea level, that’s a pretty dramatic landscape! It’s no wonder that only 29% of Greece can be farmed–the land is arid and rocky. But up here in the northern part of Greece, sandwiched between all these mountains are beautiful fertile crops of farmland. 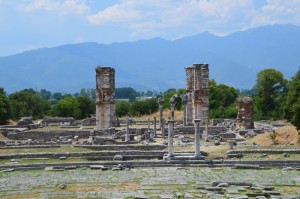 We drove to the town of Philippi, a massive site that, like so many archaeological sites throughout the country, has only a small portion of it excavated. Philippi, the ruins of the Roman city, sits in the flatter plains nestled up into the mountains, very close to the sea and was founded by King Philip near 4th century B.C.E. Mitra informed us that the site has remnants of civilization that stretches as far back as 6,000 B.C.E. This site is most famous for the Battle of Philippi, where the foces of Mark Antony and Octavian joined against the forces of Brutus and Cassius in 42 B.C.E. It was part of the War of the Second Battle of the Triumvirate one of the most famous battles in all history, two years after Julius Caesar was assassinated, Mark Antony and Octavian caught up with Brutus and Cassius to eventually defeat them.

But for us, this site was also where Paul met Lydia by the river outside the city. In Acts 16:12 it mentions the visit by Paul, and there is also a letter to the Philippians written about 61-62 C.E. According to Acts, Paul is believed to have preached for the first time on European soil in Philippi (Acts 16:12-40), and Lydia was the first European convert.

Paul visited the city on two other occasions, in 56 and 57 C.E. Scholars believe that the letter to the Philippians was written around 61-62 C.E. perhaps from Caesarea Maritima while he was in prison or from Ephesus or Rome. There is a letter from Polycarp of Smyrna addressed to the Philippic community written about 160 C.E. which shows that a church community had been established there.

To finish the first part of the morning, we all gathered together to hear a talk by Kristy right next to the river, as it babbled away through the morning. Kristy shared the story of Paul in Acts, the role of womanhood in church and why Philippi was such a favorite city with Paul, because there was so much receptivity there.

We then visited the massive Roman site next door. The sun, though, was so hot it was beating down on us in such a relentless fashion. Mitra had warned all of us that the mainland was hotter then the islands because there was no ocean breeze and boy did we all feel it today! We only saw a small portion of the site, the remains of the amphitheater where Mitra explained the gladiator culture (not quite like what Hollywood has made it out to be with Russel Crowe!) and also showed us the remains of a 5th century Byzantine Christian church. We also saw small pile of rocks that housed 1 room that we were told was probably the prison where Paul was kept when he was taken by the mob in Philippi in the story of Acts, publicly beaten and thrown into jail. We ended up eating some lunch at the small cafe in the shade to escape the heat. 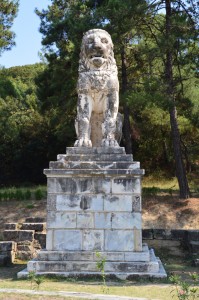 We also made a quick stop on the way back to the hotel, finishing the day with a lion statue in the ancient ruins of Kavala (Neapolis) or Amphipolis, which in Acts says that Paul passed through. We then hopped back onto the bus (which was roasting for the better part of an hour until the bus was able to crank out some serious A/C – on a side note, we have quickly discovered that the bus “A/C”, when on “high” is like the “low” setting of any car A/C unit in the states, thus it barely cranks out a whisper of cool air and thus, all of us in the bus are melting! The Greeks certainly know how to adjust to the heat), and made our way back to the hotel by dinner time (7 pm).

Kristy gave another talk tonight in preparation for tomorrow’s city walk on Thessaloniki.