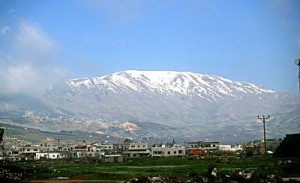 One of three sites that, according to tradition, claim to be the site of the Transfiguration, is Mt. Hermon, which is located in far north of Israel, bordering Lebanon and Syria. This morning about 7:30, we left the Hotel to take the drive up to Mt. Hermon.  This is the highest place in Israel–around 9,000 feet high, and is one of the main source of fresh water for all the rivers, streams and Sea of Galilee. It was fun to remember that we visited the Dead Sea just a couple days ago which was the lowest points on the globe at 1600 feet below sea level. There was a little snow on top, and we took a ski lift up the mountainside. There were beautiful views! 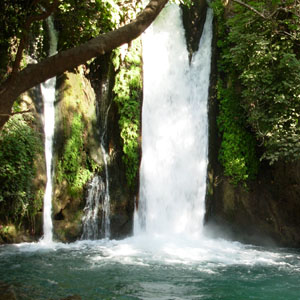 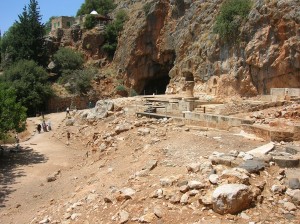 After this experience, we rode down the mountain to a place called Banias Falls. It’s the location where the Banias River flows down from Mt. Hermon to the Dan River and into the Galilee. We hiked down for about 20 minutes until we came to a gorgeous water fall. After a quick photo shoot, we hiked back up and then we drove to Caesarea Philippi where Peter confesses to Jesus that “thou art the Christ!”  This site of Caesarea Philippi takes a bit of vision, because what is there to see is not what was there in Jesus’ time. It was an ancient Roman City at the base of Mt. Hermon and is mentioned in the Gospels. Near this location is where Peter acknowledges Jesus as the Messiah. This site is located very far from Jerusalem and we can see at least the area that Jesus might have retreated to for prayer and special time with his disciples,  just before the crucifixion . We heard a beautiful talk by Kristy and then ate a lovely lunch along the rushing water at a Lebanon Restaurant. 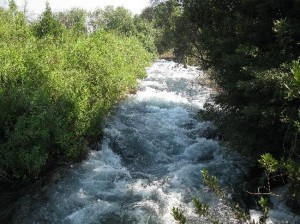 Next we drove for a while to Tel Dan which is one of my favorite sites. Not only is it a gorgeous nature walk alongside a rushing Colorado-type stream, but it represents one of the only sites where we can visually see a place that Abraham might have walked. 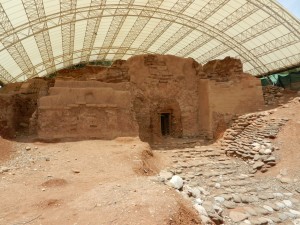 Dan is the northern most city of Israel (from Dan to Beer Sheba in the south, the Bible says). People occupied the area as early as 4500 B.C.E. Abraham was said to have walked through the “Mud Gate” that has recently been excavated, when he was trying to save his nephew Lot. 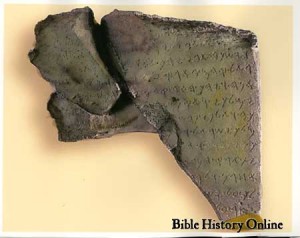 In 1994, the Tel Dan Stele was discovered. This stone with its inscriptions, tells of the  King of Damascus, Hazael, and  it contains an Aramaic inscription commemorating victories over ancient peoples  including “Israel” and the “House of David.” This is the first time the name “David” has been found at an archaeological site and is the only authentic reference to the biblical king David. It is an amazing discovery!!!

Our special end of the day activity was a rafting trip down the Jordan River. The kids all changed clothes, spread out into groups of threes and fives and rafted for about 1/2 hour down the swift moving water. We finished the day with dinner in our hotel and then listened again to another talk by Kristy.