Originally this day was to be a completely free one, and each of us were going to go off on our own. But Sarah, our guide, found out that the House of Lords and the House of Commons were going to be at their party conferences out of London, so for these two weeks, they were allowing tours of inside Palace of Westminster where the English government is conducted. She was able to get tickets at the last minute and we met in the lobby to walk to the Westminster Government buildings. 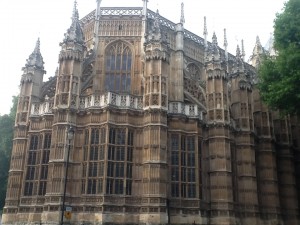 The inside of Westminster has had a massive refurbishment that has just been completed, so we are very fortunate to see inside these ancient government chambers and view them in their best light. The House of Lords and the House of Commons are the two governing bodies in the Parliament of Westminster along the River Thames in London. It was originally built in the 11th century and has been meeting as the governing bodies of England since the 1300’s. The Palace at Westminster was the home for all the monarchs of England during the Middle Ages for centuries.

This magnificent Gothic building was rebuilt after a fire in 1834. Inside, the halls and rooms are very ornate, with heavy carved wooden paneled walls, marble statues, portraits and frescoes of battles and wars etc. During Queen Victoria’s time (19th century), Prince Albert was put in charge of the paintings that would be housed in the Palace. He made the rooms have themes around famous and important English Battles such as Waterloo or Trafalgar. This site was actually one of the ones we liked the best. Not only are we familiar with the chambers in the House of Commons and Lords because of movies and TV news programs, but the art, the history, the architecture are so singularly original, that we all felt it was like peering into the history of England at one site. We weren’t allowed to take pictures inside the building, so the ones on the blog were what we saw as we walked up to it. 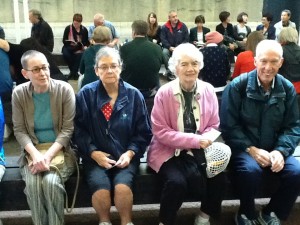 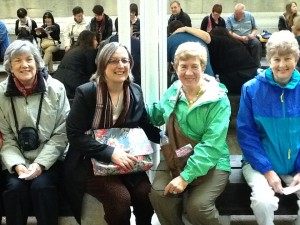 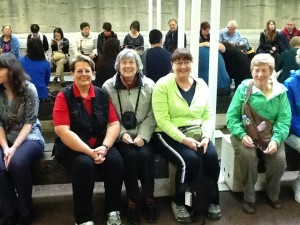 After our personal tour with Sarah, we stopped in at the Westminster bookstore and then split up in our individual group tours. Some went shopping, or to the British Museum. Some went to Kensington Palace or Liberties Dept. Store, etc.  The rest of the day was spent doing our own thing at our own pace.

Tomorrow we leave London to drive southwest to see Winchester, Stonehenge, and Dartmouth.