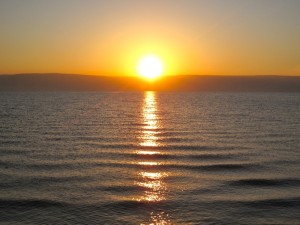 This morning our alarms went off at 4:30 am so we could get up for a sunrise “Morning Meal” talk by Kristy. We all groggily piled into the bus and drove to a spot picked out by the guides on the shore of the Galilee. As the water lapped up on the rocks and small stones, Kristy delivered a beautiful talk on the “Morning Meal” (which is where Jesus appeared to his disciples after his resurrection). All of us watched in peaceful contemplation as the sun rose over the water in a sparkling dance of golden sunlight. What a way to start the day! 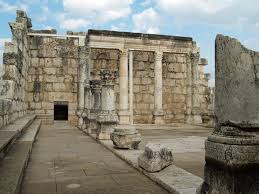 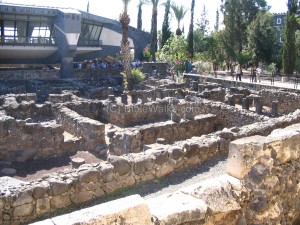 Our first archeological stop today was just a short bus ride to Caperneaum, where more of Jesus’ healings took place than any other site. We found a wonderful spot on the shoreline during mid-morning to sit and listen to another talk by Kristy, where we learned about Jesus work here in this special town. The ruins of Peter’s house is the main focal point here.  A Catholic Church has built as a shell of a building over the ruins so it’s difficult to see the foundations of the house actually. I think the intent was to protect it from erosion, but it is an ugly modern building that keeps us from viewing it. Located to the north of Peter’s house is a very large 3rd or 4th century synagogue built over the site of the synagogue that was there in Jesus’ day. This early synagogue may have been the one where the Centurion’s healing of his servant may have occurred and where the Centurion helped finance the building of it. 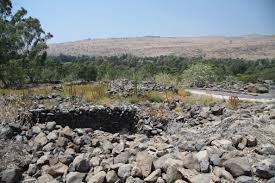 We hopped back on the bus for another short ride to the newly-excavated town of Bethsaida, one of my favorite sites  where Jesus performed the healing of the blind man. This site is hardly ever crowded. In fact, we were the only group walking around. Scholars are discovering that this site must be close to where the  feeding of the 5000 by Jesus happened. The lake has receded from the hilltop village through the centuries. It is probable that the lake was right next to the fishing village in Jesus’ day, but today it is far down the hillside in the distance. Bethsaida is another authentic archeological site and it is authenticated that this was the actual town mentioned in the Gospels just like Caperneaum. 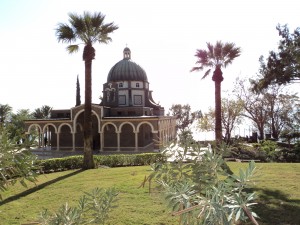 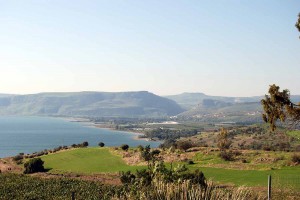 Next we were able to arrive at the Mt. of Beatitudes before numerous buses were in the parking lot. One time in the past we have counted 38 buses there with pilgrims who wanted to worship at the Catholic Church there.  We decided to avoid the church and walk down the hillside on a quiet path with the Sea of Galilee before us in full view. Nestled onto the path was a small circle of large rocks that we were able to sit on while Kristy delivered a wonderful talk on the Beatitudes and the Sermon on the Mount. Listening to the birds, sitting on the hillside and hearing the same words that Jesus might have uttered here so long ago was very moving. This site has been commemorated for more than 1600 years and pilgrims have come to worship here. After Kristy finished, and all of us joined together in saying the Lord’s Prayer as we began our final descent down a steep, slippery hill. 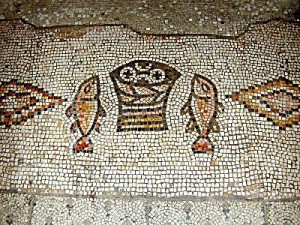 A little farther down the beach, is the location of the Church of the Multiplication, the traditional site of where Jesus fed the 5000 and the morning meal. Inside the little 4th century Chapel is a mosaic floor with basket of loaves and two fish along the sides.

Along the northern edge of the Sea of Galilee is a restaurant where we stopped for lunch. Some ate the traditional Peter’s fish (with the head, fins, and eyes still showing), others ate fillet of fish, chicken, and beef kabobs. 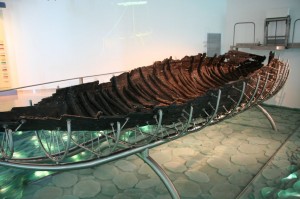 Finally, we were driven to Ginosar, the home of the Galilee Jesus Boat, or so it is called. On the edge of the Sea of Galilee a two thousand year old boat was discovered in 1986. They have created a beautiful museum called “Yigal Allon Museum” that houses the boat for us to see.

Finally, to end our day we took a boat ride out on the water. Kristy gave a short talk there, and we spent moments just listening to the lapping water and reflecting on all the events that happened on this same lake. Very special day since so much of it sets the scenes for the context of the healings and parables and main teachings of Jesus. It is such a stark contrast to the politically-charged atmosphere of the bustling city of Jerusalem. It is easy to see why Jesus preferred to live and teach in the Galilee area.