We are spending five days in the Ramot Hotel and it is a gorgeous place nestled up into the hills of the Golan Heights. Just east behind us over the hills about 20 miles, is the Syrian border. It amazes all of us how close these places are to each other. Damascus is only 60 miles from here, where civil war is raging. The Golan Heights was a disputed area in the 1970′s because the Syrians shot rockets down onto the Jewish Kabutz farms near the Sea of Galilee. Finally, Israel successfully regained this territory in the Yom Kippur War of 1973, so they can always control it and also protect their water supply from terrorist attacks.

This day had a 100 percent chance of rain so we switched some things around to be more inside. We drove to Tabga and the Church of the Multiplication where tradition says the feeding of the 5,000 took place. There we saw a mosaic on the floor symbolizing the feeding of the 5,000. This symbol is often put on cups and plates to be sold to tourists. 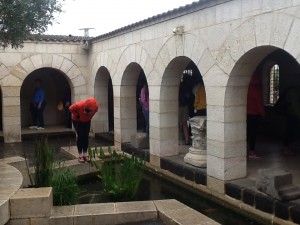 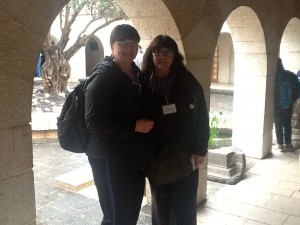 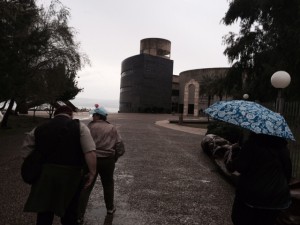 Then we drove to the Yigal Allon Galilee Boat Museum. On the edge of the Sea of Galilee a two thousand year old boat was discovered in 1986. In the museum we got to see the preserved 1st century boat. It was quite amazing, since even though no one can claim Jesus or his disciples used that particular boat, it is guaranteed they used something similar.

Also because it was raining this morning, Eitan took us to a small Galilee modern Jewish town high up in the Galilee hills where he lives. 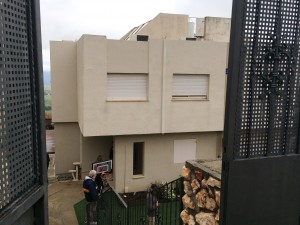 He allowed us to go into his home, walk around and see his million dollar view of the Sea of Galilee! Safed, the name of the town, is a center for Kaballah worship. Many Hollywood stars come here to study this mystical version of Judiasm. We went around the town for about an hour shopping in the art galleries there. Next to the bus when we climbed on was a Bar Metzvah, with dancing in the street, right next to our bus. 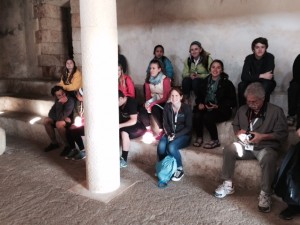 Then we drove through the abundant crops of wheat and barley, until we arrived at the turnoff to Nazareth. The village of Nazareth in Jesus’ day had probably only 500 people, but today, it’s a huge city that sprawls and spreads over the hills. There are 70,000 people, mostly Arabs and Christians with some Jews also living there. It’s a thriving city on the hillside.

In the old city there is a small man-made replica of Nazareth in Jesus’ times run by Messianic Jews. Several years ago the city was digging to develop and expand but found instead, a few rare artifacts identified as 1st century. An excavation quickly went underway, (our guide, Eitan informed us he worked on this site in 1998!), and authentic buildings were uncovered. 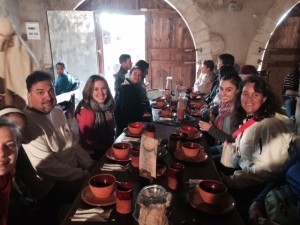 Our first activity before the tour was being treated to a 6 course meal, authentic to the 1st century. It was the type of meal that Jesus might have eaten with fresh pita bread hot off the fire-pit oven, yogurt and wheat seed dip, hummus with olive oil, salad with honeyed vinegar dressing, yummy lentil soup, simple barbecued chicken and finally apples with honeyed date dip. It was delicious!

Then we saw a vineyard set on the hill, a watch tower and evidence of the terraced walls dated to the 1st century. The site is small and intimate in the middle of a busy city, and instead of leaving it as an archaeological site, it is now a replica of a small village during Jesus’ time. During our tour, we were shown a shepherd with his flock of sheep, a vineyard, weaver’s shop, a wood-workers shop, an olive press, and an authentic synagogue, along with a tomb that had a rolling stone across the entrance. 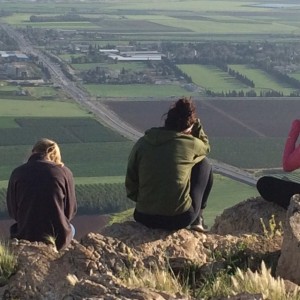 Our next stop was called Mt. Precipice, traditionally where Jesus was taken and almost thrown over the brow of the hill after he dared to declare he was the fulfillment of the Messianic prophecy of Is. 61. Kristy also shared some thoughts on this event as the group looked around the hillsides with a 360 degree view.The day was just amazing–the weather was very windy, and the clouds and rain had been blown away. Now we were looking at verdant, green fields, with the sun streaming down on us. 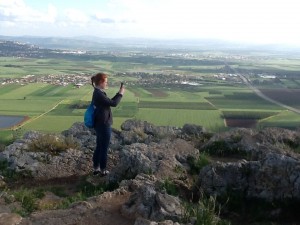 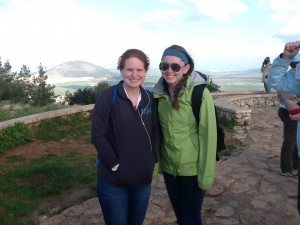 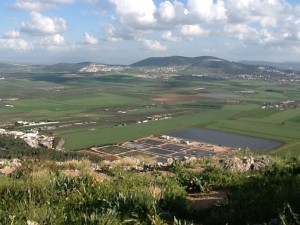 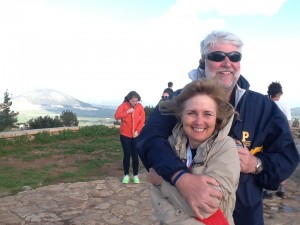 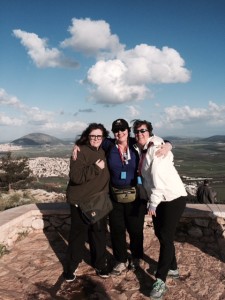 We drove back to the Hotelwith beautiful views on every side, and a glorious sunset behind us, chasing us home for dinner! Tomorrow, the weather is supposed to be in the 70’s with sun all day.