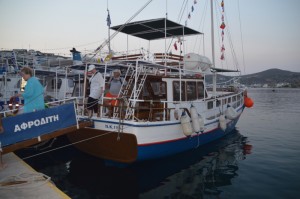 This morning we woke up in a very leisurely manner, having breakfast at ten o’clock and not leaving till noon were we boarded a caique, a traditional Greek boat for a day cruise. Initially we were going to be driven to the port to pick up our boat but to our (delight and surprise!) the boat came to the private beach of our hotel so all we had to do was walk out and there it was! What a way to travel–we all agreed we could get used to this island life.  It took us a good hour and a half to cruise across the waters, passing several remote islands along the way and finally slowing down to stop at a cluster of islands – each of them super tiny, remote and most of them uninhabited. We even saw a herd of goats perched on a small piece of land (like a quarter-of-a-mile long literally, and our guide, Mitra, informed us that locals drop the goats off to graze and then give them water and pick them up and move them to a different island to graze–that’s an interesting thought!). Mitra also informed us that out of the 1400 islands throughout Greece, only 277 are inhabited. 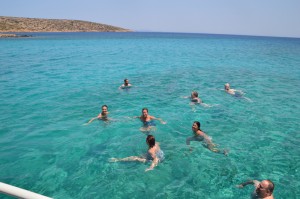 On the boat, most of us were perched in the upper deck area with a roof-top while a few of us braved the wind at the front of the boat, we cruised at a pretty comfortable pace. At one point, the boat pitched left and right with spraying water as some waves crested a little harder because of the wind. But as soon as we slowed down to cruise into a little lagoon, other small boats were there taking advantage of the shelter and shallow waters. It was absolutely breath-taking. The waters turned from the deep cobalt blue of the sea to the purest turquoise we have ever seen. The water here is crystal clear. Patches of darker shades of turquoise, teal, aqua-marine, and sapphire revealed sea weed clumps, but it looked like it was about a foot deep when really they told us the rocky shoreline was 30 feet below us.

Here was our first test of jumping in the water. We forgot to mention that back at the hotel, most of us braved the waters but the water here is ice-cold – slightly warmer then Michigan water but it definitely makes you think twice even with the hot sun blaring down your back! So here, as the boat stops and throws anchor, we are all looking at each other like, “we are supposed to just . . . jump in?!” Before we can even contemplate this, one of our brave guys on the trip jumps off and takes a belly flop in the water. As he’s gasping for air, turning around we all just stare at him dumbfounded below us, “How was it?” “Really WARM!” he yells – of course it takes only half a second to tell he’s being mischievous! But in only about 15 minutes, 90% of our group is in the water, vigorously keeping a float to try to lessend the numbing of our poor limbs because as each one jumps into the water, it truly does take your breath away! But in only a few minutes, we are all happily swimming around and enjoying the refreshing sea. 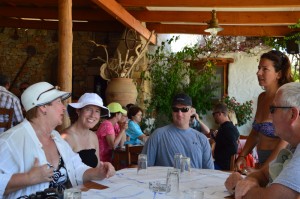 The rest of the day was just a repeat of this. We stopped at another secluded lagoon, this time a few of us jumped back in–truth be told once coming out of the water, it only took about 20 minutes to get completely dry again–and some of us swam to the little tiny beach and walked up some hilly terrain. We then were finally told we were going to eat lunch (it was about 3 pm). We cruise into a tiny island with only what seemed about 100 locals living there. We sit down at the cutest little open-aired restaurant (we only had 2 to choose from), all of us were famished. Plate after plate of traditional Greek salad (with the best tomatoes!), yogurt and garlic dips, and bread,  were quickly served and we were all trying to pace ourselves knowing that here in Europe we have “courses,” not 1 big meal like Americans are used to. Then the main dish arrives, and guess what it is? GOAT MEAT! So the poor goat herd we saw earlier that morning might’ve been the same goats on our plates. But the group was happy to try it and discovered it tasted very similar to pot roast. After eating there, we find out from our guide that low and behold, the skippers who run our little boat took us to the wrong island, and this was not the restaurant we had reservations to eat in! Apparently – “that’s Greece”–who the heck knows what happened (very few locals speak English in these parts), but we don’t even know what island we were on for lunch! 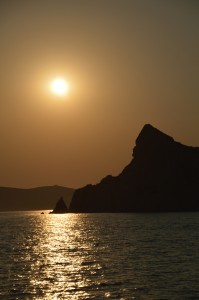 After lunch, we stopped at another watering hole, this is around 6 pm now. The sun is not as high and we have till 8:30 pm to get back to Patmos for the night so we end up just cruising for the 2.5 hours back to Patmos, witnessing the sun as it slipped down in a golden glow over the island. What a day!

We had about 3 hours for “dinner” – most of us ended up at the amazing gelato cafe scarfing gelato/nutella crepes instead. We waited around for our ferry boat to arrive at 11:30 for a midnight departure. Now the word, “ferry,” in the US conjures up the image of the kind of ferry that transports commuters from Long Island to Manhattan with nothing but plain deck chairs and awnings. But here in Greece, a “ferry” is a mini cruise ship that travels between the islands on a 24-hour basis, that houses about 1,000 passengers! We even witnessed cars and 18-wheeler trucks coming in and out of the garage area before we boarded realizing this is the only way supplies and other major necessary items are transported to these islands besides people. By the time we end up boarding, we are all about to fall over we are so tired and each of us is very grateful for our private cabins with personal bathrooms and showers. (Most of the passengers go the cheaper way and race to fight for areas of the boat that have seats). But apparently the boat has restaurants and cafes but all of us do not take the time to explore. It’s about 1:15 am by the time most of us end up climbing into bed, so grateful to lay down. 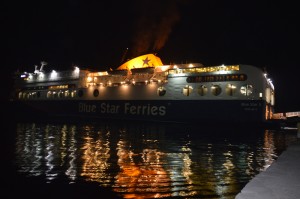 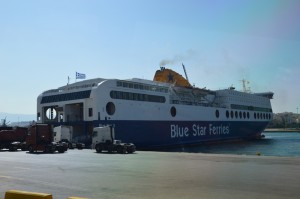 We pulled into Athens port around 9 am this morning and then hopped onto a bus to travel the 6+hours to Thessaloniki, the second largest city in Greece behind Athens, and almost to the northern most boarder of Greece, close to Albania and Bulgaria. This is our first main city where we will stay for 3 nights and travel out tomorrow to the ancient site of Philippi two hours away. After such a long 36 hour day, all of us are grateful for our cold air-conditioned rooms in a small but modern hotel with excellent internet and a hot shower. We will all sleep well tonight!