We headed out of Jerusalem this morning, going westward down the hillsides.  One thing we have learned, is that people in this land traveled around constantly. Jesus and his disciples went from Tyre and Sidon in the northwest, to Caesarea Philippi in the northeast and 120 miles down to Jerusalem in the south. Every step one takes is either up or down, and is over rocky ground. Nothing is easy about the travel and when we think they did it in sandals, it is even more impressive.

We descended further west of Jerusalem until we arrived at an Arab village that was called Abu Ghosh in Jesus’ day. We drove up a mountain side to a church, and in the front yard of the church was a grove of trees with a spectacular view. We all sat on limestone benches in the quiet and listened as Kristy gave another outstanding talk on that important event we call the “Walk to Emmaus”. 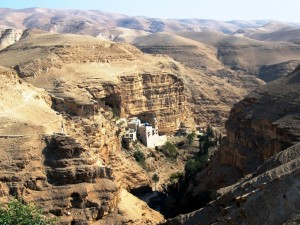 We got into our bus for the long drive to the Wadi Kelt. The Wadi Kelt is a narrow gorge between Jerusalem and Jericho. Perhaps Jesus’ parable of the Good Samaritan happened in a gorge similar to this one. We took a short little hike up the hillside until we could see the gorge of St. George’s Monastery in the distance. For a few moments we listened to Kristy talk to us about what it meant to be a ‘shepherd’ in Bible times and who had these inspired shepherd motives. We watched a tiny herd of goats skim across the hillside in the far distance, their shepherd leading them along. It was the perfect symbol of what we were listening to. We repeated the 23rd Psalm together out loud and sang “Shepherd, Show me how to go.” 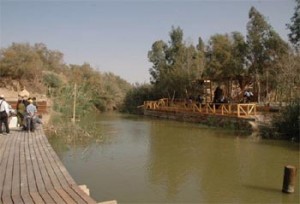 Driving up the eastern side of the country, past Jericho, we came to Qasr el Yahud, the site on the Jordan River where many scholars believe that John the Baptist was baptizing people, including Jesus, early in his ministry. The area has been redone and is a beautiful place to sit and ponder, as Kristy gave a wonderful talk to us. The kids went down to the Jordan and put their feet into the muddy rushing stream. It’s an extremely intimate place. You can literally throw a stone across the bank and you would be in Jordan! You think the Jordan River is like the Mississippi River! But it’s more like a small “creek” to us and of course it courses through at different speeds and gets bigger and smaller as it winds its way from Galilee to the Dead Sea. But it was a lovely spot to stop. 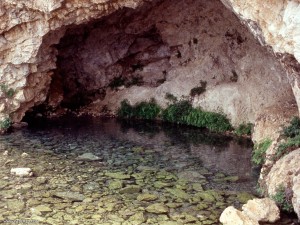 Then we drove to a place called Gideon’s Spring where the battle between the Israelites and the Midianites took place. This is the site where Gideon was told by God to test the readiness of his army to see who was prepared mentally to fight the enemy. The army on the opposite side of the valley was 130,000 strong. The Israelite army had 30,000 men. God told the ones who were afraid to leave and they were down to 10,000 men. God gave Gideon another final test. Those who took a drink in the spring of Harrod and lapped the water, looking around and not kneeling, would be the ones to fight in the battle. The number was now down to 300 men. The Israelites surprised the Midianites in the night and they fled. This story gives us some wonderful lessons telling us that numbers do not make the difference– it is the thought and heart of the people that did. 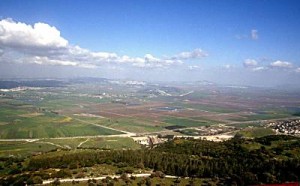 As we drove to Galilee we were able to see the gorgeous Valley of Jezreel where more battles have been fought than any place in Israel. We stopped for lunch at Beit’ Shan and then at a little grocery store for snacks and finally we arrived at our Hotel for the night. 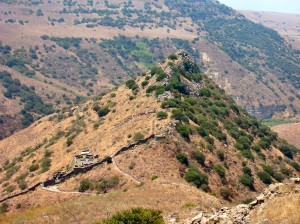 We are spending these next four nights in the Remot Hotel, a gorgeous place nestled up in the hills of the Golan Heights, overlooking the Sea of Galilee (Lake Tiberius for locals). Just east behind us over the hills about twenty miles is Syria. It amazes all of us how close these places are to each other. Damascus, Syria, is only 60 miles from here.  The Golan Heights was a disputed area in the 1970’s because Syrian rockets kept shooting onto the farms near the lake. Finally, Israel fought to regain this territory, so they can control it. If we squint in the daylight, we can actually see the defensive satellite towers standing high up on the hillsides that surround this area where the Israeli military continues to monitor for activity around its northern borders. 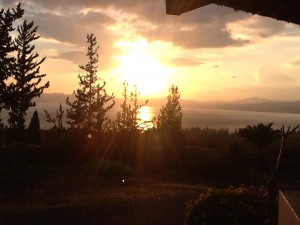 Tomorrow we explore Galilee! And the weather has finally broken, after almost paralyzing pouring rain and 40 degree weather in Jerusalem (not normal for this time of year! It is usually mid-60’s!), the group has it’s spirits up. No one has complained but it was far from ideal. All of us have western views of the Sea of Galilee as the sun sinks in a spectacular golden orb to hide behind the hillside. It’s been a warm and wonderful welcome to Galilee!