***** Just a side note to let our fellow readers be aware, we would love to have you comment at any time on the blog.  Go to the bottom of any post and click where it says “comment.” We’ll then approve your comments in our blog and then your family and friends can view. And also, just a quick reminder that any and all of our photos can be viewed in a larger format by just clicking on them. We thank you so much for keeping up with us and we will be posting again soon!

We began our morning with a delicious buffet breakfast by the beach at the Hotel Patmos-Aktis. As you all can imagine back in the states, we have all discovered the yogurt here in Greece is obviously the real thing. It makes our yogurt back in the states taste like watery glue. The yogurt here is thick as cream and tastes so rich. Adding your choice of fresh fruit, fresh jam, granola and, or nutella (some of us shamefully have admitted in the group that they’ve never tasted the chocolate and hazelnut spread that’s so famous here in Europe!), makes it worth waking up in the morning to have breakfast!

Apparently Greece encourages local guides as much as possible and since we are on the tiny island of Patmos, we were introduced to our required guide named Nicholas. He was absolutely delightful. He introduced us to our sites in the morning and also gave us little tidbits of life on the island of Patmos. It’s amazing that people actually live in such an idyllic place although it is a hard place to live–very remote and isolated. 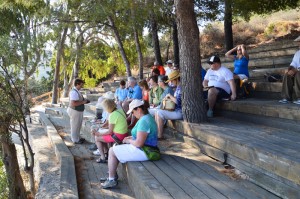 John, according to the tradition, was about 90 years old when he was thrown into a pot of boiling oil for political crimes in Rome. He walked out unscathed and was instead, exiled during the rule of the Roman emperor Domitian around 95 – 97 C.E. Nicholas explained that Patmos is considered the “Jerusalem” of the west because of this sacred pilgrimage spot where Jesus himself gave his revelation to John. Again, according to tradition, John’s disciple then transcribed the visions of John in a little cave high up in the hills of Patmos. 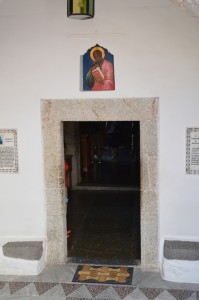 Today, we visited the tiny cave that also was converted into a Greek Orthodox chapel in the 12th century, which is still active. John was on this island for about 18 months until the emperor died. The next emperor gave clemency to all prisoners, and John was able to go back to Ephesus. The tradition in the Greek Orthodox church states that John traveled back to Ephesus (Turkey), on a stretcher by his disciples, and when they arrived, he told his disciples he was ready to die, so they should prepare his burial. When the disciples went into his tomb the next day, they found no body, and thus proclaimed that John ascended.Our first site included traveling in a bus only about 5 miles away up into the highest point of the island to see the Cave of Apocalypse where St. John, by tradition, was given the book of Revelation. At this site, we all sat down in a quiet, shaded meeting place overlooking the main city and harbor, the ocean and rest of the island stretched out before us. Kristy shared her thoughts about the book of Revelation, John and the importance of church. It was such a beautiful way to begin our morning.

Our next stop included driving all the way up the hillside to the very highest point of Patmos to visit the Monastery of St. John. It was interesting to see how small the original church area was, covered in ornate wood with gold-leafed carvings, and lots of painted iconography. We also viewed the oldest paintings in a small alcove which dated back to the 10th century. 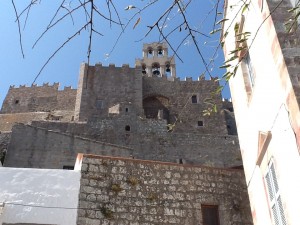 We then had a lengthy amount of time to spend in the oldest part of town, a darling and quaint strip of cute shops, cafes and restaurants right at the heart of the harbor. Most of us split into groups grabbing a long, leisurely lunch, while others spent more time shopping. But before meeting up again on the bus, a lot of us found the “Italian homemade” ice cream parlor and filled up on an authentic treat before meeting on the bus and coming back to spend another sun-filled afternoon basking on the beach. We then met up again in the evening around 7 pm to hear another talk on the chapters 5 & 6 of Revelation.

We most likely will not have a post tomorrow because we are spending the entire afternoon and early evening on a small boat cruising about three tiny islands. Then we are scheduled to take a midnight cabined boat back to the Athens port to start the mainland part of our tour. We will arrive in Athens around 8 am and then have a 5 and half hour drive to Thessaloniki, where we plan to stay for three nights. Hopefully in the next couple days we will have internet and be able to update our travels and group photos.