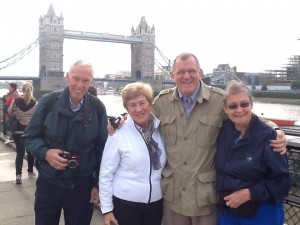 Saturday dawned bright and early with a short drive west from our Hotel, to the Tower of London, along the River Thames.  This Royal Palace and Fortress was founded towards the end of 1066 as part of the Norman conquest.  William the Conqueror built the White Tower that we can see from a distance, using it as a grand palace in its earliest times. The Tower of London has been prominent in British history especially in the 12th and 13th centuries. It served as the home palace for several 12th-13th century kings, including Edward IV (The White Queen TV series that is currently showing in the US on Showtime is about Edward IV and the War of the Roses).

It has served as an armory, a treasury, the home of the Royal Mint, and stills houses  the Crown Jewels of the British Empire. During the 16th and 17th centuries it was a prison for many famous people such as Elizabeth I before she became queen. It was a place of torture and execution where Sir Walter Raleigh was held prisoner and Lady Jane Grey, who was Queen for nine days, was beheaded. Anne Boleyn and Catherine Howard were also executed by their husband, Henry the VIII, at the Tower. Today it is one of the most visited travel sites in central London. 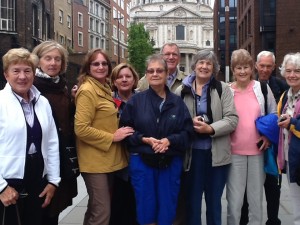 After the Tower we took a short drive to St. Paul’s Cathedral, the seat of the Bishop of London. The original church was founded in 604 C.E. and dedicated to St. Paul. Sir Christopher Wren built this church in the English Baroque design after the Great Fire of London in 1666, a fire that completely wiped out the medieval center of the city which was comprised of mostly wooden buildings. The cathedral sits on a hill overlooking the city, and from 1710 to 1962 it was the highest building in London. Many distinguished funerals are held here throughout the centuries, such as Lord Nelson, the Duke of Wellington, Sir Winston Churchill, Margaret Thatcher, and others. The wedding of Charles, Prince of Wales, and Lady Diana Spencer was held here in 1981. 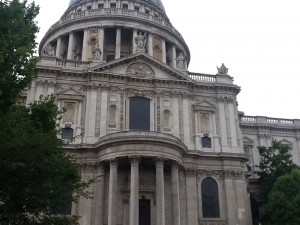 After this we were all dropped off at various places to go on our own individual tours, some going to Harrods Dept. store, others to the Victoria and Albert Museum, and the rest picking and choosing their own delightful routes through the city. Kristy and I went to second Church of Christ, Scientist, London during the afternoon so that Kristy could give a talk to a small group of Sunday school teachers and students. It was a wonderful way to spend the afternoon. 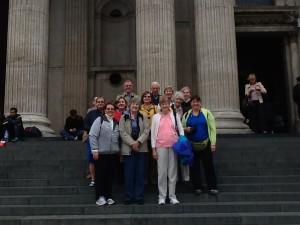 omorrow we head to Windsor Castle and to the British Library to view several original Bible treasures. 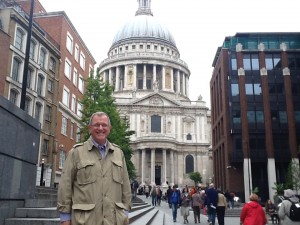