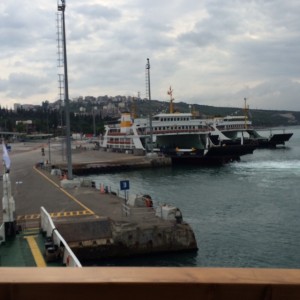 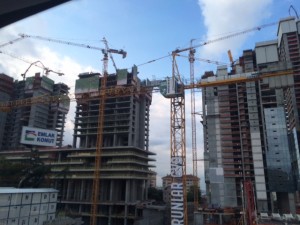 Istanbul to the Asian side, crossing one of the two bridges that span the Bosporus. We headed out of Istanbul to drive to the town called Nicaea. As we drove through the city I was just amazed at the new construction of high rise buildings along the way, enormous, beautiful buildings, lots of industry and acres of large high rise apartment buildings. It spoke of great wealth, at least here in Istanbul.  The landscaping along the sides of the roadway was quite beautiful. Everywhere gardens of begonias, marigolds, and other brightly colored flowers, were sculptured in exquisite floral designs. It was very impressive.

Then we drove through several miles of orchards, all kinds of fruit trees and olive trees. Finally we arrived at the town of what used to be called Nicaea in the territory of Bithnyia. 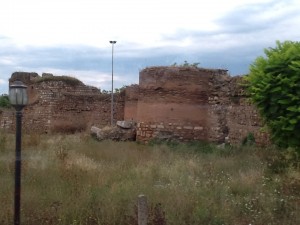 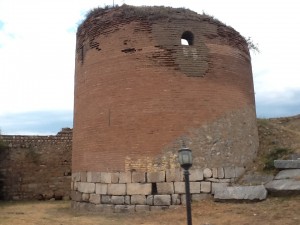 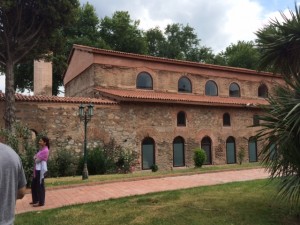 We saw first a very early Christian church built, I think, in the 600’s. We also drove to the outskirts of this little town to see the walls and gates of the city of Nicaea that have stood for almost 2,000 years. One hundred towers were installed in the walls, and the city today is still contained within the ancient walls of early Nicaea. These ruins were pretty amazing because Paul probably walked through these gates as well as Emperor Constantine and the bishops who attended the Council of Nicaea in 325 AD.

Nicaea was the seat of the Eastern Roman Empire for centuries. Constantine, in the 300’s, had his palace here along a beautiful lake and we saw just a few remaining ruins of it. This was where he called the Bishops from all over the world to decide the question of who Jesus was. He called 1800 Bishops from all over the Roman world, and about 300 came to the first council. After weeks of arguing and debating, they decided that Jesus was the true God, co-eternal with the Father and begotten from His same substance. It had been a controversy for 200 years, and was always hotly debated. Constantine wanted it to be settled, and it was here that this took hold and became orthodox Christian doctrine. The Nicene Creed was also established during this time.

We ate a typical Turkish meal at a local restaurant along the street where no one spoke English. Our guide had to explain everything on the menu, and many people picked the charcoaled grilled lamb or chicken, and it was outstanding!  They brought us baskets of large homemade bread, and they kept filling them constantly. It was really delicious!

Next we drove to what was left of the palace of Constantine, just a few stones along the beach of the enormous lake nearby. Then we drove back through the city to our Hotel.

Tomorrow we plan to go through the famous bazaar, take a cruise, and then fly to our next destination called Antioch. (Christians were first called Christians at Antioch). Tomorrow will promise to be a long, busy day!