Today was an early day because we had to get in line to go through the heavy security to get up on the Temple Mount. We got there around 7:00 because The Temple Mount is only open until 11:30.  The Temple Mount was the original home of Solomon’s Temple (built in the 900′s B.C.E.), Zerubbabel’s Temple, (built after the Babylonian Exile in  586 B.C.E.), and then Herod the Great’s Temple. Herod had torn down Zerubbabel’s and replaced it during Jesus time (he began around 20 B.C.E.). It took about 45 years to finish it completely. 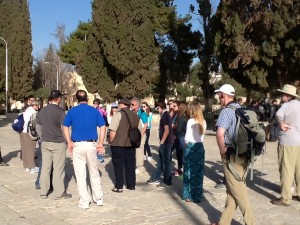 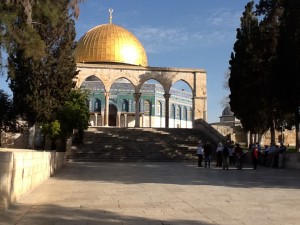 The Temple itself is no longer available to see because it was destroyed by the Romans in 70 C.E. In 691 C.E. the Dome of the Rock was built by Muslims on top of this holy site, over the rock where Abraham almost sacrificed Isaac. This foundation stone is the holiest site for Jews, Muslims, and Christians. For Jews, it is the location of the Holy of Holies during the Temple period. For Christians, it is close to where Jesus was crucified and resurrected, and for Muslims, it is the site where Muhammed ascended and is one of their three holiest sites, along with Mecca and Medina. 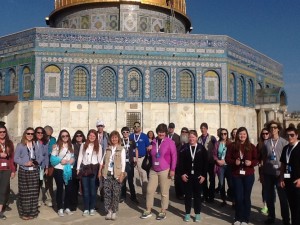 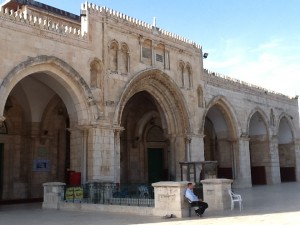 After our visit to the Temple Mount, we visited Davidson Archaeological Center near the corner of the Temple Mount. After viewing a wonderful movie on the development of the Temple, we walked around the physical Temple site with Eitan as he pointed out the steps that Jesus may have actually walked, the shops just outside the Temple platform, Robinson’s Arch, and a large pile of stones from the Temple that were torn down by the Romans. The pinnacle of the Temple was where the priest would blow the shofar (trumpet) for everyone to stop and pray. There is an inscription on one of the large stones saying “This is the trumpeter’s place.” Also James, the brother of Jesus, who was the head of the church in Jerusalem, was thrown off the pinnacle of the Temple by the Jews as told by the historian Eusebius.

Another important location that we saw near the Temple Mount was the Wailing Wall or Western Wall. This is the only piece of Herod’s Temple remaining after the destruction.

Today orthodox Jews from all over the world pray here (believing that the presence of God is literally there)  leaving their handwritten prayers on little slips of paper in the cracks of the wall. It has been a holy site for this purpose for centuries. Women pray on one side of the plaza, and men on the other, divided by a long fence. As they pray and retreat, they must never turn their backs on the wall, backing out with bowed heads as they leave. Some of our group either brought prayers or wrote prayers to put into the Temple wall.

Our next stop this morning was the site where scholars believe David built his palace and established his capital around 1,000 B.C.E. Located on a narrow ridge, south of the Temple Mount, it has natural defenses through its steep valleys on three sides. David had to conquer the Jebusites who lived in the city to establish his palace and government. Then he ordered the Ark of the Covenant moved from Shiloh to Jerusalem where it stood in the tent form until Solomon built the first Temple on Mt. Moriah where the Dome of the Rock stands today.

We first watched a 3-d movie on the development of the City of David, and that helped us to put what we were seeing into better perspective. Then we  climbed down through the ruins of the City of David to reach a tunnel that was dug underneath in 701 B.C.E. during the reign of Hezekiah. The tunnel leads from the Gihon Spring to the Pool of Siloam and was designed during King Hezekiah’s time to provide defense for the city. 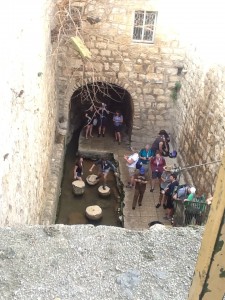 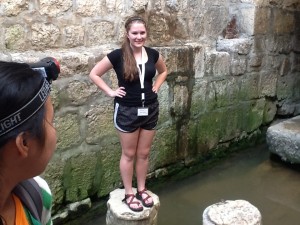 Our group was led down extremely steep steps, deep into the earth where the tunnel begins. The water started out as high as my upper thigh, so I know for some shorter people, it was almost waist-high. Then it dropped to just a foot or so. The passage is extremely narrow and sometimes low, so one has to bend over for a while. Two teams dug the tunnel from opposite ends, each team digging through the limestone rock until finally they met in the middle. Our group walked the 3/4 mile through the very narrow rock walls, singing hymns along the way. It was quite an accomplishment that everyone in our group was able to make it through with joy and freedom.

The newly discovered Pool of Siloam is at the end of Hezekiah’s tunnel. This location was just recently found and is beginning to be excavated. We sat on the steps of it and listened to a very inspiring talk by Kristy on the ‘healing of the man born blind.’ 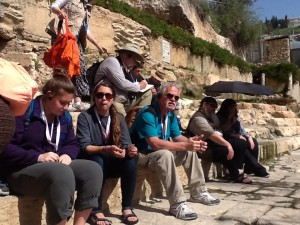 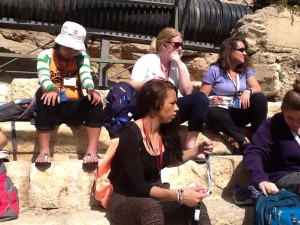 We got on the bus to change our shoes and then drive to the Zion Gate in the Jewish Quarter. Eitan showed us some places for lunch and then we met him at 3:30 pm for watch a film on the Burnt House. The Burnt House is an excavated house from the Second Temple period situated six meters below current street level in the Jewish Quarter of the Old City of Jerusalem. The Burnt House is believed to have been set on fire during the Roman destruction of Jerusalem in 70 C.E. According to Josephus, Jerusalem’s Upper City was known for its wealth. It was located close to the Temple and inhabited by priestly families who served in the temple. The house was destroyed one month after the Temple and Lower City. When the Romans stormed the Upper City, they found little resistance. Much of the population was near death from disease and starvation.

Christa Case Bryant will speak to us tonight about 7:30 pm about Mary Baker Eddy’s purpose for the CS Monitor.