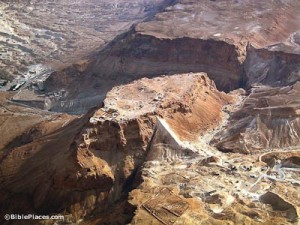 This morning we ate breakfast together in the dining room of the Bedouin tents and then drove for almost 2 hours into the desert until we were on the northern side of Masada. Even though it isn’t in the Bible, Masada is one of the most spectacular sites we will see on our trip.  Masada is a high rock plateau on the eastern side of the Judaean Desert that overlooks the Dead Sea. There are only two ways up the southern rock cliffs, a nice luxurious ride on the cable car, where you can overlook views of the wilderness and the Dead Sea, or long steep hike up the ‘snake path’ along its sides that’s definitely grueling in height of the summer heat (if you are in shape, then that’s a good workout!). Ancient Roman ramparts were built for the Romans to attack the mountaintop around 70 C.E. on the northern side of Masada. Many of us walked with Eitan up this rampart while the rest rode in the bus for 45 minutes around the fortress cliff to the southern end of Masada.

Herod the Great rebuilt Masada as his fortress palace between 27 and 31 B.C.E. Herod built two main palaces, (to keep his wives separated actually), with state-of-the-art bathhouses (which housed cool and hot running water), a synagogue, storehouses, and three hanging palaces off the cliffs of the northern side. During the Jewish Revolt in 66 C.E., 990 Jewish zealots and rebels fled to Masada after Jerusalem was sacked and destroyed. They lived on top of Masada for 2 1/2 years before finally committing suicide the night before the Romans were to climb across the ramparts and either  kill everyone who was alive on the top or enslave them. There were only two women and a handful of children left to tell the tale (according to the ancient historian Josephus). Today, Masada’s history has been embraced again by Jewish patriotism. It is often celebrated with light shows and reenactments of the Jewish Revolt during the year (it’s become a symbol of resistance and survival to the Jewish people). 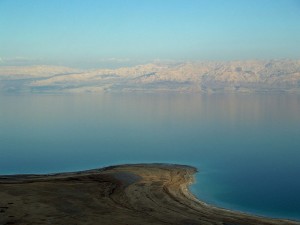 Our next stop was a tiny resort at the Dead Sea where our group could test what it is like to swim in one of the saltiest lake in the world. The Dead Sea boasts about 32% salinity as is about 9.5 x saltier that the ocean. There is so much salt and minerals in it that you float. One can hardly put your feet down into the water because you are so buoyant. You don’t even have to tread water, you stay on top like a cork. The water feels oily and light and when you walk out in the middle and look down, you can see the bottom which is white with salt crystals (literally!). Another interesting fact is that the Dead Sea is the lowest place on the surface of the earth, about 1500 below sea level, and not one bit of life lives in it, (not even microorganisms) thus the name “dead sea” or “salt sea.” 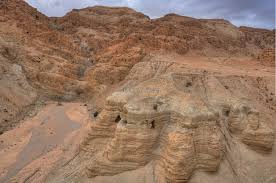 Our next site we visited was Qumran, just about 20 minutes north of Masada. This is where the Essene sect of Jews once lived, who were a group of extreme radical Jews who believed in a rigorous view of Judaism. They lived in the desert like hermits almost, bound together by their small community but lived very frugally like monks (it is speculated that perhaps John the Baptist might have been associated with this group and perhaps even Jesus himself may have had contact or known about them).

Qumran though as been made famous in modern times by the discovery of The Dead Sea Scrolls, which were discovered in 1947, when a young Arab boy threw some rocks into a high cliff-like cave and broke a pottery jar. Inside the jars,  a monumental  discovery was found. There were over 900 scrolls in various conditions, with the Hebrew Bible written on them. They are the oldest known surviving copies of biblical and extra-biblical documents, written in Hebrew, Aramaic and Greek. They date from 150 B.C.E. to 70 C.E. during the destruction of the Temple in Jerusalem. 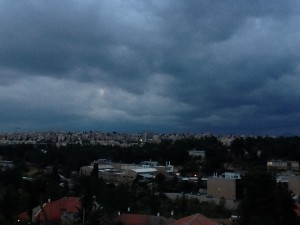 We continued our bus ride “up to Jerusalem,” which is always the way the Jews refer to it. “Aliyah” in Hebrew means to climb or ascend. It is a physical journey, but more importantly a mental one. To be exalted or to come up before God. And this phrase “to go up to Jerusalem” is used throughout Scripture. Jerusalem is located on a kind of land peninsula between three very deep ravines, one of which is the Kidron Valley, famous in the story of Jesus and the Passion week. 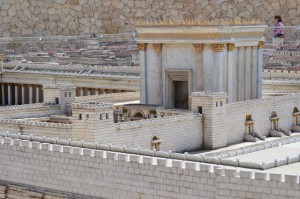 We drove until we reached the western side of Jerusalem in the modern section where the Knesset and government buildings are located. Close by is a wonderful model of 1st century Jerusalem in Jesus’ time, built out of what looks like beige, granite legos. There is the reconstruction of Herod’s Temple, the Palace of Herod Antipas, the Upper and Lower city, the Pool of Bethesda and other important landmarks. One can walk around the model viewing the city from all sides. It is probably about the size of half a basketball court but obviously is the perfect setting for us to imagine and try to reconstruct what we will  be seeing in the form of ruins in the next couple days.

Attached to the Jerusalem model area is the Shrine of the Book and Israel Museum founded in 1965. The Shrine of the Book is the museum housing the Dead Sea Scrolls. The architecture is shaped like the domed lid of one of the pots where the scrolls were found. We killed time in the Israel Museum until hopping on the bus one last time to the hotel, finally anticipating a nice, hot shower, a full meal and . . . bed!