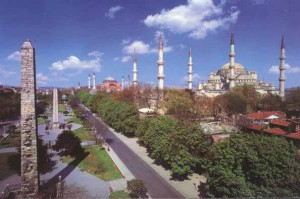 Today, we toured St. Sophia, the Blue Mosque, the Hippodrome and the Archeological Museum of Istanbul. The day was just gorgeous!  A real “Colorado summer day” with cool winds, brilliant sunshine, glorious skies, and mild temperatures. The traffic was minimal because of “Ramadan” and school holiday.

The first place the bus dropped us off was the Hippodrome area. The Hippodrome of Constantinople was a circus, and sporting and social center of Constantinople, capital of the Byzantine Empire. Horse racing and chariot racing were popular pastimes in the ancient world and most large Greek and Roman cities had one. During Constantine’s time (324 CE), the hippodrome held as many as 100,000 spectators. Today it is a huge plaza between the Blue Mosque and the St. Sophia Church museum. 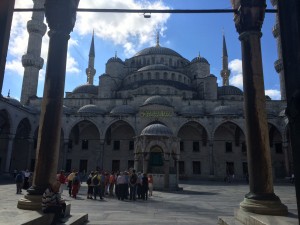 The Blue Mosque is called that by the tourists because of the blue tiles on its exterior and interior. It was built by a Sultan around 1609, and has six minarets which show the wealth and power of its ruler. To get into this Mosque we all had to be covered, and if we did not bring a veil, we were given one and a skirt if our pants were too short. We also had to take off our shoes before entering, and we held them in our hands in a little plastic bag. 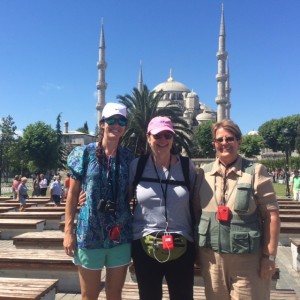 St. Sophia Church-Mosque was constructed in 537 AD, and stood as a church and then a Mosque until 1453. Originally it was an Eastern Orthodox cathedral and the seat of the Patriarchate of Constantinople. Between 1204 and 1261 it was converted to a Roman Catholic cathedral under the Latin Empire. In 1453 until 1931 it was converted and used as a mosque for Muslim worship. Today it is an open museum and is really beautiful and spectacular.

We all dispersed for lunch in the cafes along the street and then met later to go to the Archaeology Museum.

At the Istanbul Archaeology Museum we were able to see several important Biblical artifacts. One was the actual Siloam Inscription from Hezekiah’s Tunnel in Jerusalem (we walk through this underground tunnel on the Israel tours so it was fun to see the original plaque the commemorated that event). An additional inscription talked about the balustrade in the Jerusalem Temple between the Court of Gentiles and the  Court of Women.  If any Gentile crossed that balustrade they would be killed on site, and the inscription warned about that ancient law. In Acts, there’s a story about Paul bringing a man into the Temple but the Jews accused him of being a Gentile. It immediately caused a riot in the Temple courtyard even though the man had been circumcised as an adult and his mother was a Jew, the Temple police were not aware of it. So it is highly likely that Paul and the disciples would have seen this exact inscription plaque that we saw in the museum. Thrilling to think about.

Tomorrow we drive to Nicaea where the Council of Nicaea was held in 325 AD.