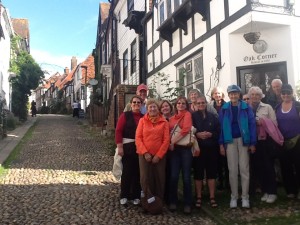 Leaving London at 8:45 this morning we had a lovely drive (after getting out of the traffic in London) through gorgeous countryside south through the county of Kent. On both sides of the road were golden fields of wheat and barley. Sheep were also scattered throughout the fields all along the way. We saw quaint homes built in the Middle Ages as we drove to Chartwell House, the home of Winston Churchill. 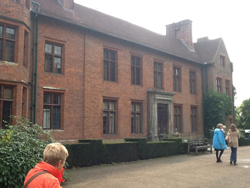 From 1924 until the end of his life, Churchill considered this is country home. He loved the landscape, the beautiful rolling green hillsides and the lakes on his property. Clementine, (his wife), and Winston purchased this home in 1922 and began a major renovation of the house. Throughout his life, Winston found great peace and solace painting its landscapes, sitting in favorite chairs thinking, and entertaining friends and family. During the war years, he wasn’t allowed to stay there because his aides felt it was too close to the Channel and could easily have been bombed or invaded. But after the war friends purchased the house for him to live in for the duration of his life with the promise that it would be given to a National Trust and preserved. 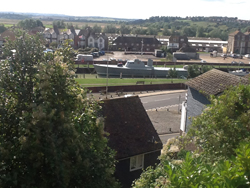 After our lovely tour there and some favorite tea and scones, we drove further south to a tiny town called Rye. Today it is about 2 miles from the open sea, but during the Middle Ages it was right on the water. This town of about 4,000 had a port and 52 of its ships were in reserve service for the king at all times. The town is very quaint and precious with the exposed timber houses and a beautiful old church that was built 900 years ago.

Hastings is just down the road from Rye and that’s where the infamous Battle of Hastings took place (and also the favored TV program Foyle’s War takes place.)
For several hundred years Rye was known for its gangs of smugglers. They notoriously stole goods and ran from government officials through hideouts and tunnels all through the town. Rye is a hidden treasure that usually isn’t on the regular tourist routes and we were fortunate to spend a half day there in brilliant sunshine and soft weather.