Our first stop this morning was one of the most spectacular sites we will see on our tour, what used to be a fortress-palace called “Masada,”  the high rock plateau on the eastern side of the Judean Desert, which overlooks the Dead Sea. 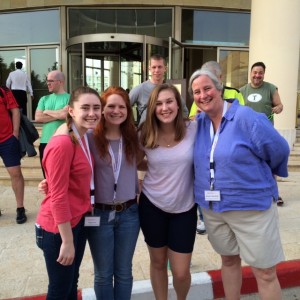 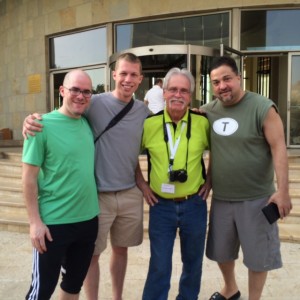 There are two ways up the rock cliffs, one – the cable car, and the other a long steep hike up the ‘snake path’ along the side. All of us took the cable car, which in itself is a little scary, stretching across a huge ravine and up, up, up, to the very top of the mesa. 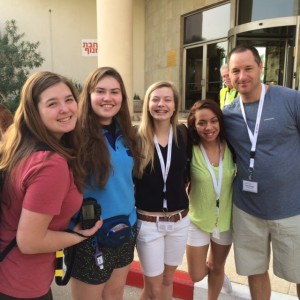 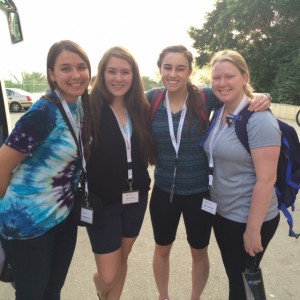 Herod the Great rebuilt Masada as his fortress-palace between 27 and 31 B.C.E. Herod built two main palaces to keep his wives separated, luxurious bathhouses, a synagogue, storehouses, and three hanging palaces off the cliffs of the northern side.
During the Jewish Revolt in 66 C.E., 990 Jewish zealots and rebels fled to Masada after Jerusalem was sacked and destroyed. They lived on top of Masada for 2 1/2 years before finally committing suicide the night before the Romans were to climb across the ramparts and either kill everyone who was alive on the top or enslave them. There were only two women and a handful of children left to tell the tale (according to historian Josephus). 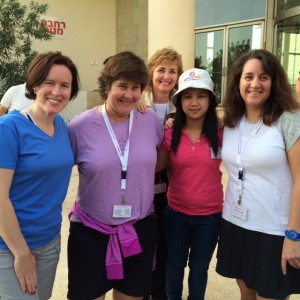 After Masada, we got into our bus for the long drive to the Wadi Kelt. The Wadi Kelt is a narrow gorge between Jerusalem and Jericho. Perhaps Jesus’ parable of the Good Samaritan happened in a gorge similar to this one. We took a short little hike up the hillside until we could see the gorge of St. George’s Monastery in the distance. For a few moments we listened to Kristy talk to us about what it meant to be a ‘shepherd’ in Bible times and who had these inspired shepherd motives. We repeated the 23rd Psalm together out loud, and spent  a moment or two in quiet contemplation.
Then we crossed over into the West Bank, a place we’ve read about and seen on the news but have never been to before. This area of the West Bank is geographically the ancient location of Samaria, located in the central heartland of the country just west of the Jordan River. The Israelis have built a huge cement wall around the West Bank after extremist Palestinians orchestrated a series of suicide bombings between 2000-2003 during the Second Intifada. To the Israelis, the wall is called the ‘separation barrier,’ and to the Palestinians, it is referred to as the “racial or apartheid wall.” It is 430 miles around and about 30 feet high. According to the Israelis, the number of attacks has gone down from 73 to 12 per year between 2004-2006, when the wall was built. Since 2006, there have been none.
Families live on either side and even though they can go into the other side, it’s a very difficult process to get permission. We, as Americans, cannot fathom how many separate religious and political factions there are in this country, all claiming something about their “ancestral right” to live where they want to because of something happening hundreds, even thousands of years ago. What we have quickly learned is that we want the issues to be black and white, but here they are extremely complicated. It’s no wonder that each issue goes deeper and deeper with both sides providing good, equally passionate arguments. We wonder how in the world any politician or leader can help solve these issues unless these people start to compromise.
We are a little amazed at the beauty of the countryside of the West Bank. Huge rolling hills everywhere, filled with rocks and boulders. How can they farm on this rocky land? But our guide tells us that the economy in this region is starting to flourish despite the complex political environment. We certainly see beautiful hillside mansions everywhere, so maybe that is true.
Finally we came to  the ruins of ancient Shiloh. This is the place where the Ark of the Covenant and the Tabernacle stood safely for 369 years before it was destroyed by the Philistines. We saw a wonderful film about early Shiloh, Hanna, Samuel. It was a panorama of gorgeous views of the surrounding hills, with the story on film on top of it.
Shiloh became the major religious center for the Jews and the city prospered. Here, the Philistines captured the Ark when Eli’s sons disobeyed him by taking it into battle with them and by desecrating the worship in the Tabernacle. The Philistines burned Shiloh to the ground. It was pretty cool to see that they have just found the exact dimensions of where the Tabernacle stood and are just beginning excavations.
Next we drove up into one, of two, Samaritan cities, called Kiryat Luza, right next to Mt. Gerizim. They still practice their unique branch of Judaism. 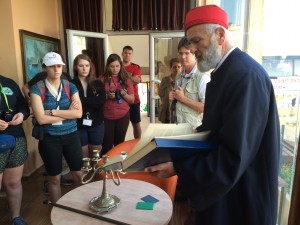 There are only about 2,000 Samaritans in the world today that live here and in another city south called Holon. This small community believes that they are the true “Jewish” remnants of Abrahamic law because their ancestors did not disperse after the Babylonian Exile in 586 B.C.E. They still adhere to the lunar calendar and offer animal sacrifices, goats and sheep. Eitan took us to the community center in town where they will have their annual sacrifices this coming April.
We were allowed to visit with a wonderful older gentleman who was the high priest’s brother, named Japhet. He shared many interesting things with us about modern worship of their little community. He told us they desperately needed more girls to marry, and were any of our young women on our tour interested. (He was just joking). 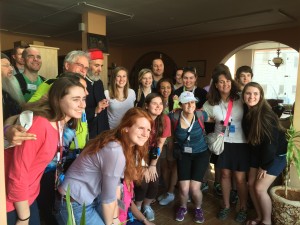 “Josef’s view” near Nablus was our next stop. It was on a very high hillside on Mt. Gerizim with a spectacular 180 degree view. Because the weather was so clear, we could see for miles and miles. The city of Nablus was below us, filled with high buildings and residential homes, along with a thriving metropolis. Eitan pointed out Joseph’s tomb far in the distance. Joseph’s family brought his mummified body to the Holy Land after his death in Egypt. We also learned that Mt. Gerizim is where the Samaritans, as well as some other Islamic groups, believe the almost-sacrifice of Issac was located – not inside the Dome of the Rock in Jerusalem.