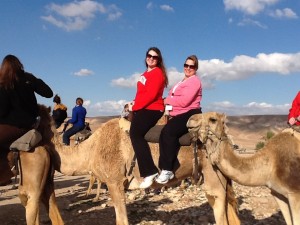 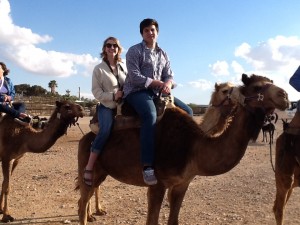 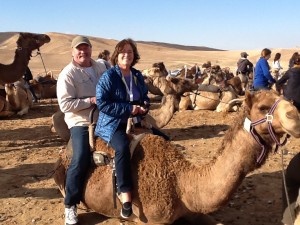 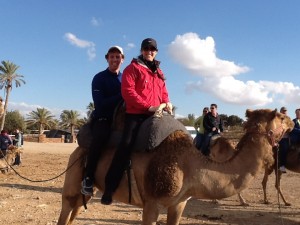 Early today we arrived in Tel Aviv after an all-night flight from Newark, New Jersey. We gathered in the baggage claim area, found our bags, and our Israeli guide – Eitan Chamberlein. He took us to our tour bus where we met Mousa, our bus driver.  He will stay with us for the next ten days. What’s amazing about this team is that Eitan is an American Jew who now is an Israeli citizen, and Mousa is an Israeli Arab. But they are great friends and try to work with each other as much as possible. It is a testament to a new generation of Israelis, partnering together despite their ethnic backgrounds, they have great respect for one another. We are so excited to be with them again!

Our first stop was Bet She mesh which means “house of the sun”. It was where the ark of the covenant was returned to the Hebrews after it was stolen by the Philistines.

Then we drove to Mishear where the prophet Micah (in the Old Testament) and also Herod the Great (New Testament) were born. We saw a 3rd century Roman colosseum that once held 1,500 spectators.

Our next stop was the Valley of Elah. This Valley is where David fought Goliath so many centuries ago (about 1000 B.C.E.). We hiked down into the ravine and creek-bed where David and Goliath is said to have confronted one other in their fateful fight. Kristy shared her inspiring talk about courage and the faith David had, even though so young and just a shepherd boy, he put all his trust in God and knew he would defeat Goliath.

Then we drove to the Kfar haNokdim Bedouin Village in the middle of the desert. Once we got there, immediately were hoisted up onto camels for a 45 minute ride through the desert. Riding a camel is weird! It feels like a cross between a horse and an elephant (although how many of us have actually ridden an elephant!). But once you get the hang of it, it’s a very pleasant cadence (although you really do feel it when you get off – your thigh are burning!). But everyone had a blast taking pictures of each other, laughing about how ridiculous some of us were trying to get on and off and felt like it was truly a once-in-a-lifetime opportunity.

Kristy, Eitan, and I walked through the Bedouin compound to view an upgrade of accommodations that we didn’t know about. Instead of an enormous tent for all the group we were given family tents that held seven people (we all slept in the enormous tent last year which was . . . interesting!). The showers and bathrooms were within our area. This was so much nicer than the previous place to stay and further away from a 600 Jewish school kids group who were also there. We were spared their noise and screaming thank goodness!

After the group dismounted from their camels, we gathered in the main area tent to listen to an authentic bedouin-born man share with us his life, his many wives, his children, and what he does for a living. We found it to be fascinating! He gave us all tiny cups of tea and coffee, as it is customary to offer guests this type of refreshment as a greeting. We stayed quite a while to ask him more questions.

Then we entered a large tent for dinner, where some of us actually sat at tables while others sat on the floor around the tables enjoying authentic Bedouin food. Finally, after an full day, of not getting that much sleep from running off the plane (literally) to our first stop, we fell into bed, exhausted. Although the next morning, we found out some of the group stayed UP and continued to star-gaze into the night around a campfire! Pretty amazing day. You definitely feel that this is an ancient culture that’s been living pretty much the same for over 5,000 years.

Tomorrow we travel to Herod the Great’s ancient fortress, Masada for a full day and then an afternoon at the Dead Sea.