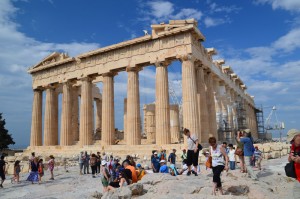 This morning we left the Hotel bright and early to walk around the corner up to the Acropolis (the home of the Parthenon, the Temple of Athena, and Mars Hill). Our first stop was the top of the huge marble hill, Mars Hill (or hill of Ares, named after the God of War), just at the foot of the Parthenon. Apparently in ancient antiquity, this is the site where they held the high Court of Appeal. Many pilgrims come to this site today to see where Paul the Apostle made one of his famous speeches. 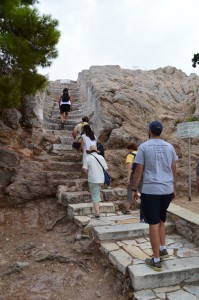 Kristy gave a beautiful talk about Paul and his lecture to the Athenians which can be found in Acts 17:28. “In him we live and move and have our being.” Paul was able to address all sorts of Gentiles right where they were in thought, and in the middle of hundreds of statues of gods that the Athenians worshipped, he speaks about one of them that had the sign “to the unknown god.” When they heard about the resurrection of the dead, some of them sneered, but others said, “We want to hear you again on this subject.” A very few of his hearers actually became followers of Jesus. Among them Dionysius, a judge of the council, and another Damaris, a woman who heard also heard Paul speak were recorded as the first converts. But Paul didn’t stay long in Athens, and he never organized a church here or wrote letters to them.  There just wasn’t much receptivity in a thought filled with intellectualism and scholasticism. In his journeys he made his way instead to Corinth. 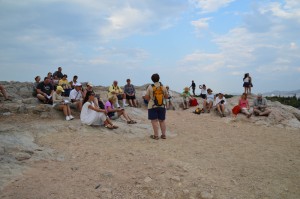 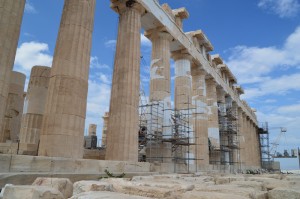 After this talk, we walked amongst huge crowds up onto the Acropolis where the Parthenon and the Temple to Athena stands in all its majestic glory. The sacred rock of the Acropolis was for many centuries the most important religious center of the city of Athens. The first traces of occupation go back to the Neolithic period. After the 11th century B.C.E., it became dedicated to the goddess of Athena, after she won the test between herself and Poseidon after striking the ground with an olive tree. The city chose her as their patron goddess and named their city after her name. In the middle of 5th century B.C.E., Athens was at the height of its power, and under the direction of the talented orator and statesman, Pericles, a massive building construction program began and the Parthenon structure, as we are most familiar with it today, took over 60 years to complete in 438 B.C.E. 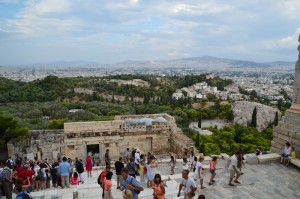 Although the decoration of the Parthenon continued until 432 B.C.E., we were told that in its glory days, the tops of the pediments and columns would have been painted in bright colors, mostly cobalt blue, yellow and red. Our local guide, Nicolos, briefly explained some of the brilliant engineering that went into building this project–each stone, for example, had to be cut individually because the entire structure is designed to adhere to the ancient principles of perspective. All the columns are “tapered” at the bottom, larger and then smaller in the middle and then larger on top to create the illusion that all the columns are perfectly straight to the naked eye. It is the most important surviving building of Classical Greece and is an enduring symbol of Ancient Greece today. They are currently trying to restore much of its beauty, however, it is an extremely expensive project and moves rather slowly because they are finding more and more amazing facts about how it was built. Nicolos told us about an excellent documentary that PBS produced couple years ago. Again, another example is that they found that there were beams of wood inside the columns that helped keep them in place and when engineers took some apart today, they found that when the ancients placed the stones of the columns together, not a millimeter of space was between them so that when they found the wood inside, the wood had not even deteriorated in 2,500 years–it was perfectly preserved! Because of all these new methods about how they built the temple is coming to light, the restoration of the temple is so slow because most of the time, Nicolos told us, we, today, don’t know how they built it! 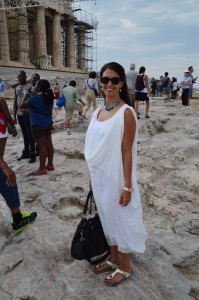 From the top of the Parthenon, one has a 360 degree view of Athens today. Their great harbor is in the distance, and our hotel was just down the hill. We could also see many ruins of the Agora or marketplace-civic center, Mars Hill, and other ancient structures.The Temple’s glory was short-lived. It fell into disuse after being pillaged in a barbarian invasion in the 3rd century C.E. Through the centuries the temple was extensively quarried for building materials to supply building projects elsewhere in the city. And in 17th century, during the Venetian war with the Turks, a bomb landed on the acropolis and took out a major chunk of the middle of the temple.

Tonight is our last dinner at a typical Greek restaurant with singing, dancing, and traditional Greek food. Tomorrow we all take a cab or van to the airport and will be soon on our way home. We have certainly fallen in love with our gorgeous guide, Mitra, throughout the trip (as she fondly has called us her “cookies” from day one) and we have so appreciated her easy and entertaining way of telling us the ancient stories and facts about what we are seeing each day. We thank her so much for being part of our trip! 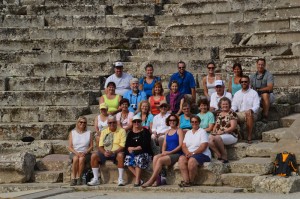 And what a trip this has been! And how much we appreciate all of you who have taken the time to support us and to read our blog. Hopefully, someday you will come with us to study the Bible in the Holy Land!  Turkey is just around the corner next summer, and we’ll be studying the seven churches of Revelation there.

Signing off with gratitude and love!
Kathy, Katy & Jamie