(Please note that even though this is posted July 17th, this post is for July 16th–this night we had an unexpected long drive to Poseidon’s Temple and didn’t get back to the hotel till 11:00 pm at night). 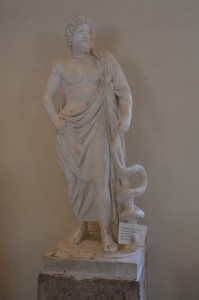 This morning we drove for about an hour to the site of Epidaurus out in the middle of the countryside nestled against some higher mountains and hills. It’s one of the most lovely settings we have seen for an ancient city. The site is extremely ancient, boasting inhabitants there from before the Greeks, over 4,000-5,000 years ago. But during the high point of the Greek culture, around 1,000 B.C.E., Epidaurus began as the center of healing for the ancient world. Enjoying a mild climate and plentiful water from natural nearby springs, it became an ideal setting to offer and serene healing sanctuary. In the Mycenaean period, the doctor-turned-hero, Malos (or Maleatas), was worshipped and after 1,000 B.C.E., it was said that Apollo himself assumed his name. His cult evoled into that of Asklepios, culminating in the 6th century B.C.E. The Asklepios at Epidaurus was the most celebrated healing center of the Classical world, the place where sick people went in the hope of being cured. To discover the correct cure for their ailments, they spent a night in the enkoimeteria, a big sleeping hall. In their dreams, the god himself would advise them what they had to do to regain their health. In the sanctuary, there was a guest house with 160 guest rooms. The city flourished under the prestige and reputation of healing by Asklepios as the major god of healing and the city grew in wealth and building projects through the 3rd century B.C.E. Monuments and buildings were added and continued throughout the Hellenistic period until, in 87 B.C.E., the Roman general Sulla looted the city. However, it was rebuilt in the Roman style and survived until the Goths raided it in the 4th century C.E. 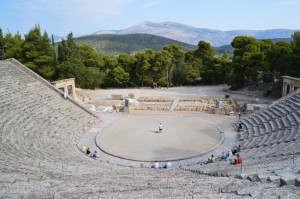 The first place we walked to was the huge amphitheater that held over 15,000 people. It’s still intact and the best preserved ancient amphitheater in the world, and even used today for performances. The higher we climbed, the more beautiful the view of the distant mountains. The acoustics were impeccable as we tested out the sound, anyone standing in the highest upper balconies could hear clearly what was said down below. Mitra explained that the engineering was so accurate, that it actually filtered out the lower sound waves so that only the higher waves could reach the top. Kristy gave a talk on Asklepios and the Cadusius, the symbology behind the two headed snake that winds itself around a staff used for all medical signs and buildings today. 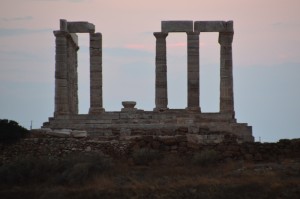 After visiting the site, we continued our long (and final) drive to Athens. After rolling into the city late afternoon, we rested for a couple of hours, and then took a long drive around the dramatic southern coastline to stop for a lovely 5-course dinner by the sea and then continue to Attica, where eventually we came to the Temple of Poseidon, god of the sea. By the time we reached the Temple, however, we were a little later then we anticipated as the sun was setting and the gate was closing, so we could only see the Temple from afar. The landscape against the beaches, and crystal clear water was absolutely stunning, and the sun setting along the coastline and waters was very breathtaking. 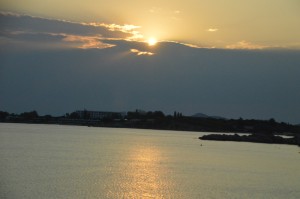 After a long day on the bus, we drove back to the center of Athens to sleep and prepare for our last day in Athens tomorrow and the tour of the Parthenon.