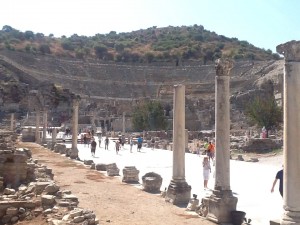 In the ancient world, Ephesus was a center of travel and commerce. This fabulous complex metropolis was one of the greatest seaports of the ancient world, although it’s hard to imagine that today. During the past 2,000 years, silt has built up until now the sea is about 5 miles away and the valley of silt is filled with green crops.  The monumental Temple of Artemis (Diana in Latin) was one of the seven wonders of the ancient world. Paul’s successful ministry in this city was considered a threat to this very temple (Acts 19:27) and to the silversmith economy. 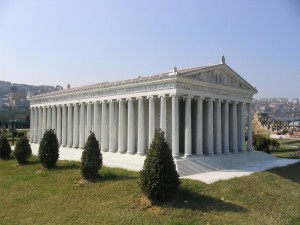 The theater held 25,000 people. When the Apostle Paul was accused of causing the despising of the “magnificence” of the great goddess Diana and her Temple of Artemis, the mob gathered in this theater and for two hours yelled “Great is the Goddess Diana”. (Acts 19:23-41). At one point, Paul might have been imprisoned in a tower in this city.
We walked acres of  the uncovered ruins of Ephesus, viewing the long Roman road, the homes along the way, the baths, the latrines, the magnificent Celsus library, the Agora, and one of the largest theaters in the ancient world.
We decided to leave our hotel at 7:00 in the morning to avoid the crowds of people who come for the day on cruise ships and the heat. By the time we left there were at least fifty buses in the parking lot. We were so grateful for that decision.
Paul and John, and perhaps Mary the mother of Jesus, all had some connection with Ephesus. The tradition says John the disciple took her to Ephesus with him, and she lived the last days of her life there on a hilltop cottage.
Next we stopped for lunch at a roadside local Turkish cafe, and many of us had pide, a kind of pizza– delicious! 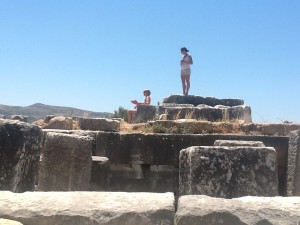 Our last site of the tour we drove by Miletus, an ancient sea port, where Paul left for Jerusalem, after speaking to the elders of the church in Ephesus. We got out and were abe to walk up a very beautiful theater that is still in good condition.
At the end of the trip, the bus driver calculated we had driven over 2,060 miles. We saw so much of the real Turkey, not at all what normal tourists usually see, and all of us were very impressed with the place, the people and the things we learned about the Bible.
No tour I have been on has taught me more about Paul and his travels and the churches in Turkey. I hope some day you will be able to join us! Thanks for walking this land with us! We travel all day tomorrow for home.