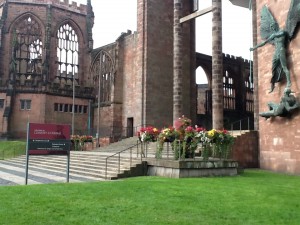 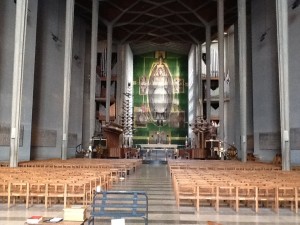 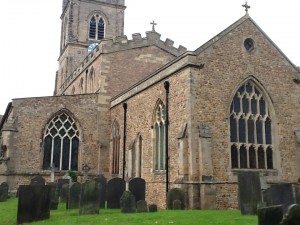 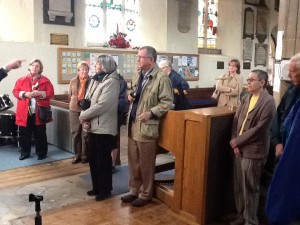 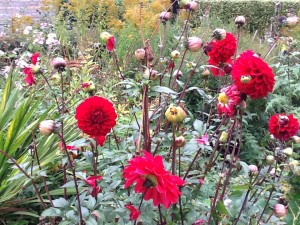 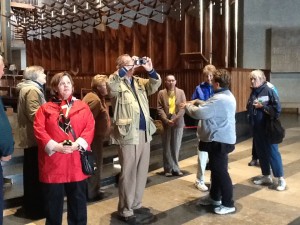 Our Hotel for two days is “Billesley Manor Hotel, about three miles outside of Stratford-upon-Avon. The first mention of the manor was in The Doomsday Book, the official royal survey ordered by William the Conqueror after he won the Battle of Hastings in 1066.

Several historic events have occurred here. “It was here that Shakespeare put ink to paper and wrote As You Like It where the famous line ‘all the world’s a stage’ is found. It was also home to one of the most highly regarded ancient surnames of England, the Trussells. The property was owned by them for 400 years and folklore has it that a servant to the family was responsible for bringing the ‘Black Death’ from London to the village on a coat he had stolen. In those days the village population was around just 26. . . It is believed that Shakespeare used this library to write, and that his granddaughter, Mrs. Elizabeth Nash, married her second husband in the Billesley Chapel.”

Kristy gave a talk our first night here on Wycliffe and his importance. We also had a lovely dinner in one of the dining rooms all together. Every room on the main floor is from the Elizabethan Period, just an amazing place to stay.

The next day we drove to Coventry, a town that was virtually destroyed by the Luftwaffe in November 1940. The beautiful medieval cathedral was almost wiped out along with massive sections of the town. Factories pumped out ammunition and planes for the war so it was a highly strategic target by the Germans, who knew exactly what they were doing when they tried to destroy it. The Bishop of the Cathedral immediately said ‘we will rebuild’ right after the bombing, and eventually a 20th century cathedral went up next to the ancient one. Everything about this cathedral is symbolic and really all about resurrection. On the altar, in the old church are the words, ‘Father, forgive them,’ which shows the thinking behind this new interfaith cathedral. After touring the town we drove to the small town of Lutterworth, not usually on anyone’s tour map.

St. Mary’s Church in Lutterworth is renown for being the home of John Wycliffe, who presided as rector from 1374-1384. We had a wonderful talk by the former mayor of Lutterworth on Wycliffe and his importance to the Christian faith. Wycliffe is one of the pioneers of the belief that the common man should be able to have the Scriptures available in his own tongue. He worked on a translation of the Bible taken from the Latin Vulgate (produced by the Roman Catholic Church) into English. Wycliffe also challenged the Roman church on several fronts including the belief of transubstantiation. He went on trial several times but had the support of several influential nobles who believed in his cause and protected him. His followers, called Lollards, were men who preached Wycliffe’s beliefs and spread those beliefs throughout England. In the end, when Wycliffe died, 40 years later the church dug up his bones and burned them and scattered them in the local river so his ashes would be ‘wide as the waters,’ and not influence the people. Of course, that was just the opposite, Wycliffe became something of a martryr for the English, eventually Tyndale rediscovered the importance of this man’s work. While working on his famous translation of the Bible into English, (Tyndale lived around 1494-1536), he resourced Wycliffe’s work two centuries before him.

There is so much emphasis on Luther starting the Protestant Reformation in Germany, (and of course not to discredit or lesson his achievements questioning the practices of the Catholic Church), but we forget as early as the 14th century, reading the holy scriptures for oneself in one’s own tongue was an incredibly radical idea. And Wycliffe certainly set the stage, promoting the idea that the Bible should be in original English, and in many ways was a head of his time.

Next we drove to Stratford-upon-Avon to tour the afternoon. This was our lunch spot, and we ate, and shopped and walked around this very touristy location. We visited Anne Hathaway’s home, about a 15 minute walk away from the center of town. She was the 28 year old spinster who William Shakespeare married when he was only 18 years old. There is so much to write about Shakespeare and Anne, that I just can’t begin to tell all the stories here. But her family cottage was in her family for 13 generations, until 1911. It is an exact replica of the cottage in the Elizabethan times and its garden is just what would have been planted in her day. This is one of my favorite locations to visit because it’s so incredibly beautiful with the flowers blooming and the serene, tranquil setting. The ancient home is restored to how Hataway and her family lived during the 16th century and it’s literally like walking through a time warp.
Tomorrow we head to Blenheim Palace and to Oxford.