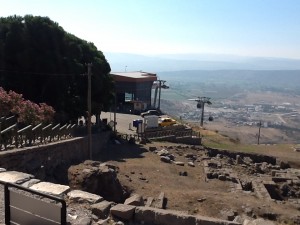 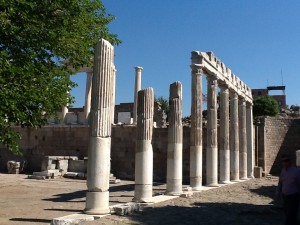 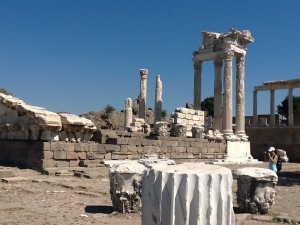 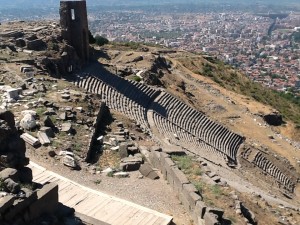 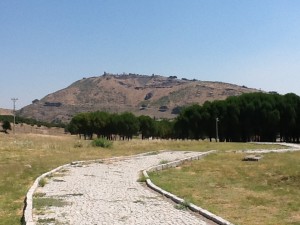 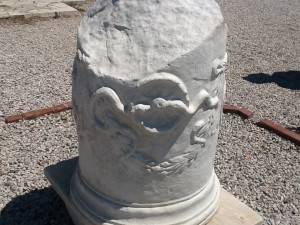 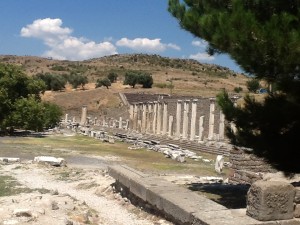 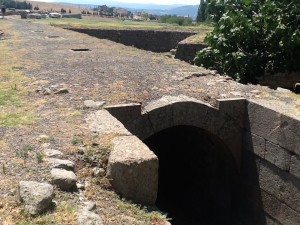 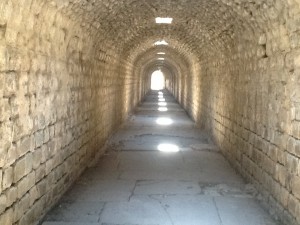 Pergamum was one of the grandest excavated sites that we have seen.  High up on a large plateau, it was the seat of one (Lysimichus ) of the four general-kings of Alexander the Great who inherited the land when Alexander died. After a slow decline, the city was favored by several imperial initiatives under Hadrian (117-138 C.E.). It was granted the title of metropolis and as a result of this an ambitious building program was carried out: several massive temples, a stadium, a theatre, a huge forum, and an amphitheater were constructed. In addition, at the city limits the shrine to Asclepius (the god of healing) was expanded into a lavish spa.
The Sanctuary of Asclepius grew in fame and was considered one of the most famous therapeutic and healing centers of the Roman world. We went to the ruins of this world famous medical facility and saw where people who were sick would walk through a tunnel, and the doctors (priests) would be overhead whispering in a hypnotizing voice ‘you are well’ above them through the grate in the ground. They would also go to a room to sleep and the priests would try to find what was wrong with them by interpreting their dreams.
Pergamon reached the height of its greatness under Roman Imperial rule and was home to about 200,000 inhabitants. The Library of Pergamon was renowned, and second only to the Library of Alexandria, although not approaching Alexandria in scholarship. Scholars think that there were between 150,000 and 200,000 books  in its library.
The city was an early seat of Christianity and was granted a bishopric by the second century. Pergamun [Pergamos] is mentioned in the Book of Revelation, as a dwelling place of Satan and a location of his throne. An early bishop named Antipas was martyred there.
We also visited Thyatira. In early Christian times, Thyatira was home to a significant Christian church, mentioned as one of the seven Churches in the Book of Revelation. According to Revelation, a woman named Jezebel taught and seduced the Christians of Thyatira to commit sexual immorality and to eat things sacrificed to idols.
The Apostle Paul and Silas might have visited Thyatira during Paul’s second or third journey, although the evidence is entirely circumstantial. They visited  several small unnamed towns in the general vicinity during the second journey. While in Philippi, Paul and Silas stayed with a woman named Lydia [“a seller of purple”] from Thyatira, who continued to help them even after they were jailed and released.
The ruins are very small here, just barely uncovered, but they are in the middle of a busy city.
Tomorrow we travel to Ephesus!!