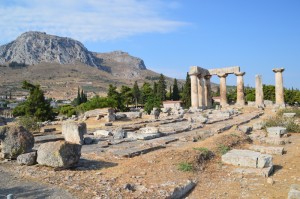 Today we got up early, ate an early breakfast and drove through the orchards to the archaeological site of ancient Corinth. It was about an hour away from our Hotel, and we did avoid the heat this morning. Kristy gave a lovely talk on the Letters of Corinthians and Paul’s stay there before other groups of tourist arrived about hour later. The ancient site is large but only about 4% of it has been excavated. Corinth is on an “Isthmus,” a narrow stretch of land that joins the mainland of Greece between Athens and Sparta. The site was occupied as early as 6500 B.C.E. and was a thriving metropolis until the 500 C.E. when the Goths overtook it. The ancient ruins that we walked around in were mostly all Roman buildings. And since we could see the sea far in the distance with the modern city of Corinth sprawled along it’s borders, we could imagine the importance of this harbor town in ancient times. 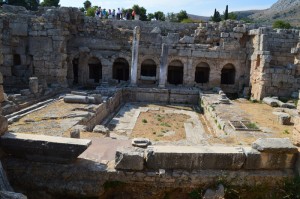 Corinth is mentioned many times in the New Testament largely connected with Paul’s mission there. It had a large mixed population of Romans, Greeks, and Jews. Paul resided eighteen months during the years of 51 or 52 C.E. He became acquainted with Priscilla and Aquila while he preached and worked there. Paul wrote the letters of First  Corinthians and 2nd Corinthians from Ephesus and then Macedonia. Some scholars believe that Paul visited Corinth for a brief intermediate ‘painful visit’ (II Cor 2:1), between the first and second epistles. After writing the second epistle, he stayed in Corinth for about three months.  While there, he wrote his letter to the Romans. Some scholars believe also that Paul might have written four letters to Corinth, however, only two of them have been found. 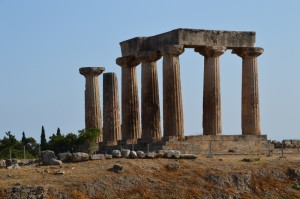 As we walked the ancient site, we learned from Mitra the importance of this city. The Temple of Aphrodite is located high up on a stepp, plateau, where the Acropolis is always located. Aphrodite is the Greek goddess of love and procreation, and it was recorded that supposedly about 1,000 prostitutes lived and worked on top of this mountain and would come down in the city to “work.” Most of these women were slaves but the luckier priestesses were educated in all forms of talents like Geishas in Japan. They were mainly to entertain and they were extremely expensive.  There was no doubt that Corinth was the “Sin City” of the ancient world, equivalent, perhaps, to our Las Vegas. Sensuality and paganism were two streams of thought that Paul had to confront. The town of Corinth held approx. 340,000 people, which doesn’t include the constant traffic of merchants and pilgrims that traveled through the two ports on either side of the city. Consequently, Corinth was extremely prosperous and wealthy. The city even had their own currency that required everyone who landed there to change their money into Corinthian currency, and of course pay the “exchange rate” tax.  The most prominent ruin of the site is The Temple of Apollo , or the God of the Sun, which would have dominated the whole area of ancient Corinth. It must have been huge, although just seven columns are left to see today.

It’s interesting that Paul went to Athens also, but the Athenians were too intellectual. They weren’t as receptive to his message, but the Corinthians, who were so involved in immorality and sensualism were receptive. Paul stayed here for several months teaching and preaching the Gospel of Christ. 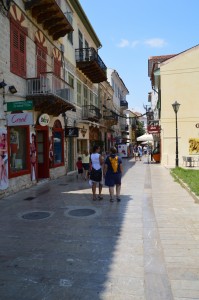 We departed from the site around lunch time (“our” lunch time which in America is around 12:30 but here in Greece we’ve quickly learned it’s closer to 1:30 or 2:00 pm). The bus dropped us all of at the port of Nauplia and we all spent a lovely couple of hours eating good food and walking around the sweet little downtown area, fully of character and charming shops. It’s the first time, actually, that we all remarked we haven’t seen the effects of how bad the economy here is because all the little shops were all full and people were walking about even though it was Monday afternoon (we have seen a lot of evidence of how bad the economy is–it’s heartbreaking). But most of us found another Italian gelato place to stop for a quick refreshment before hopping back on the bus to just chill for the rest of the afternoon in the hotel or by the pool before dinner and Kristy’s talk tonight.

Tomorrow we begin our trek north back to Athens. We will break up our trip with a morning stop at Epidaurus and continue our way to Athens in the afternoon.