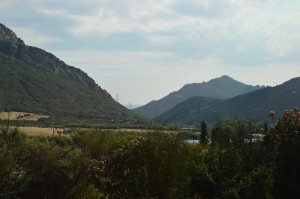 Today, after breakfast in our family-owned ski Hotel in Arachova (what’s really fun is that we actually found out the owner’s daughter was an Olympic skier, representing Greece in Utah in 2012!), we began our descent down the mountains heading for the more flatlands and plains of the Isthmus of Corinth. Most of the drive was through beautiful mountains, orchards growing all kinds of fruit and olive trees. 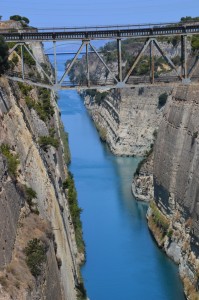 We stopped for lunch to view what is now a tourist attraction, the Canal of Corinth, a canal that connects the Gulf of Corinth with the Saronic Gulf in the Aegean Sea. It cuts through the narrow Isthmus of Corinth and separates the Peloponnesian peninsula from the Greek mainland, thus effectively making the former, an island. The builders dug the canal through the Isthmus at sea level; no locks are employed. It is about 4 miles in length and only 70 feet wide at its base, thus, making it impossible for ships to pass through. It now has little economic importance.

Mitra briefly told us some of the ancient legends and of a major curse of the canal when it was attempted to be constructed by famous emperors of Rome. It was an important project and if they had succeeded, ships could cut through the canal and not have to go around this part of Greece, roughly an extra 1700 miles from harbor to harbor. The philosopher Apollonius of Tyana prophesied that ill would befall anyone who proposed to dig a Corinthian canal. Consequently, Julius Caesar was the first emperor, who was assassinated. Caligula around 40 A.D. was next who also abandoned the project after his engineers miscalculated that if they dug the canal, the entire city of Corinth would be flooded, but he too was assassinated shortly thereafter. Finally, Nero, was the first emperor who actually broke ground but construction stopped shortly after he committed suicide in 67 A.D. shortly thereafter.

Construction finally got underway in 1881 but was hampered by geological and financial problems that bankrupted the original builders. It was completed in 1893, but due to the canal’s narrowness, navigational problems and periodic closures to repair landslips from its steep walls, it failed to attract the level of traffic anticipated by its operators. During WWII, the Nazis bombed the area heavily and also used the canal to dump all their broken military cars, and excess debris and materials because they didn’t want it to be used. The American military actually took great pains to clean it up in the 50’s but it is mainly useless except as a tourist spot.

After we saw this site briefly, we ate sort of fast foods at the roadside restaurant. Our plan was to continue on to the site of Corinth but standing in the hot sun on the bridge of the canal, we quickly realized this was by far one of the hottest days we’ve encountered so far on the trip. Kristy made the executive decision to rearrange our itinerary. Since Corinth is such a large and important site, she didn’t want to have us rushed through, obviously melting from the heat on top of it. So, the decision was made to make this a travel and “rest” day. We hopped on the bus and drove the next hour to our Amalia Hotel which sits in the middle of orchards and farm fields only 2 miles from the port city of Nauplia, in the Argolic Gulf (south of Athens). Since we arrived at the hotel around 3 pm anyway, all of us enjoyed the rest of the afternoon by the pool to begin an early day tomorrow in Corinth to beat the heat. We all think we’ll enjoy Corinth much better tomorrow!