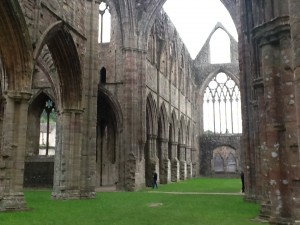 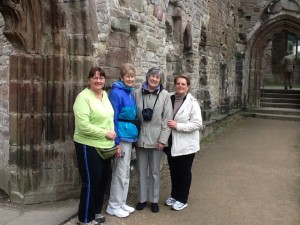 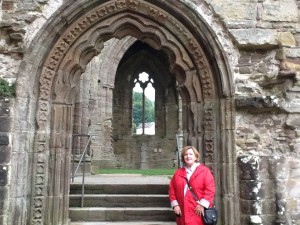 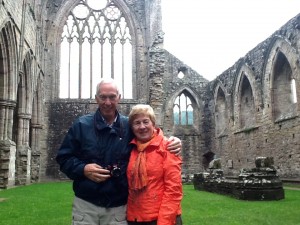 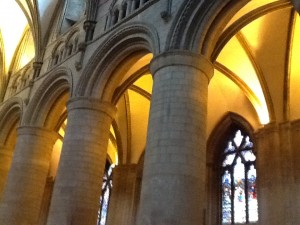 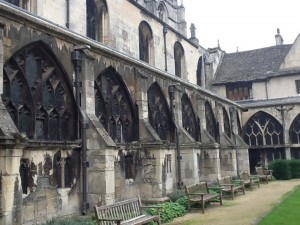 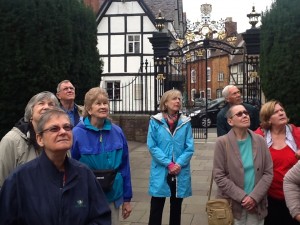 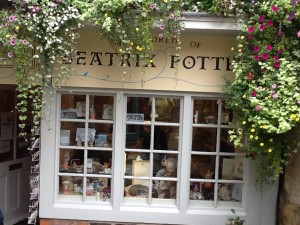 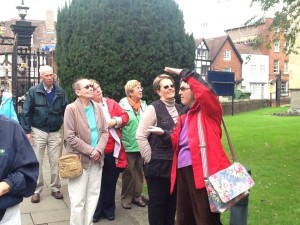 Today was really “Abbey” day. We got up early and drove to Wales to see the famed Tintern Abbey founded in 1131. It is on the Welsh bank of the River Wye, which makes up the border between Wales and England. It is set in a gorgeous river valley with steep, forested hillsides. Many poets and authors through the centuries have written about these lovely, hauntingly beautiful ruins, especially in the Victorian period. It inspired William Wordsworth’s poem, “Lines written a few miles above Tintern Abbey,” Alfred, Lord Tennyson’s poem, “Tears, Idle Tears,” and Allen Ginsberg’s “Wales Visitation.” And also inspired more than one painting by J.M.W. Turner. After the Dissolution of the Monasteries was decreed Henry VIII in the 1500s, this monastery was destroyed, as so many others around England were but the ruins have been left for centuries.

After walking around this monastery, we drove through the valley of the River Wye. It has some of the most dramatic and scenic landscape in southern Britain. Most of the small villages date back to the Middle Ages. During the Victorian Period in the 19th century, British tourism really expanded here. The romantic pull to come to Tintern Abbey and to write or paint was quite an attraction, especially after the railroads made it more accessible to a wider range of people in the 1840’s.

Next we drove to the town of Tewkesbury, which has some of the most scenic townscapes in England. It is at the confluence of the River Severn and the River Avon. The 12th century abbey has the highest Norman tower still standing in England, including strong, round Norman columns. This was the site of the Battle of Tewkesbury on May 4, 1471, during the War of the Roses. Edward IV’s forces defeated the House of Lancaster in this historic battle to become King. Currently in the states, the series on Showtime called The White Queen, follows the true story of King Edward IV and his queen, Elizabeth (even though Edward was from the house of York, he fell in love with Elizabeth Lancaster and married her in spite of political pressures).

Gloucester was our final town to visit with its Gloucester Cathedral. The town itself was founded in 97 AD by the Romans and was granted its first charter in 1155 by King Henry II. The wool trade was its main export which came from the nearby Cotswolds area. It also had a large fishing industry at the time.

Each Abbey had its own unique beauty. We didn’t tire of looking at them at all and seeing the differing features of each one. Tonight we continue along to Stratford, where we will be staying in a large hotel that is a restored large house from the Middle Ages.