Today we drove through the fertile countryside looking at fields of cotton and vineyards of sultanas grapes and orchards of pomegranates. This is a fertile land of many natural rivers that are used for irrigation, and the small farms dotting the land have been owned privately by farmers’s families for centuries.
We drove through a village that our guide told us has a fun tradition. We could see empty glass bottles or jars on the chimneys of a few houses, and she said they represented girls in the home who were 13 or so and available for marriage. If there were two or three bottles, there were two or  three young females of marriageable availability –a way to advertise.  At the wedding, the groom would break the bottle.  Our bus driver told us a joke:  “if a coke bottle is on the roof the girl speaks English, if a beer bottle is in the roof, the girl speaks German, and if the bottle is raki (Turkish drink), she only speaks Turkish.” 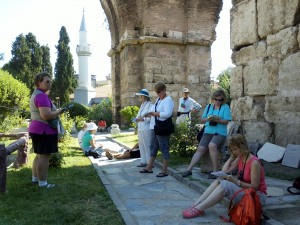 We finally arrived in a medium-sized Turkish city which was previously the location of Philadelphia. The Greek word means “one who loves his brother,” (Aleshir today),  and it was the least distinguished of the cities of the Seven Churches. It was the last to take on importance as a city, and only a few ruins are visible now.
However, on the positive side, it was located on the outer edge of Hellenistic civilization and the Christian faith, and therefore had grave responsibilities for spreading the thought patterns and activities of these transforming powers. Ten different gods and goddesses were worshipped in the first century. Furthermore, Philadelphia and Smyrna were the only two churches among the Seven about which nothing negative was said by John. 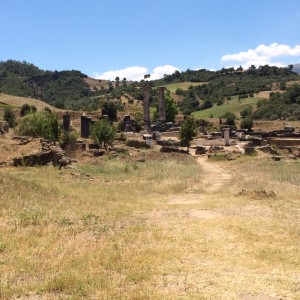 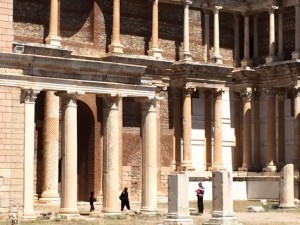 We then visited Sardis, which was one of the greatest cities of the ancient world. It was 60 miles from Ephesus and Smyrna. As one of the Seven churches of Asia, it was addressed by the author of the Book of Revelation in terms which seem to imply that its population was notoriously soft and fainthearted and super self-important. Its self-confidence was due, first to its military strength, secondly to its situation on an important highway leading from the interior to the Aegean coast, and thirdly to its commanding the wide and fertile plain of the Hermus.
We walked the eastern side of the city where there was the largest synagogue in the world with a thousand male members. Next to it was a huge gymnasium with Roman hot, cold, and tepid baths, and a large field for exercise and wrestling and other games. There were the typical shops along the road, and the Roman street with chariot wheel impressions. Probably 100’000 people lived in this extremely wealthy city.
On the other side of the city of Sardis was the Temple of Artemus or Diana which was the largest  temple, second only to Ephesus, with 78 gigantic pillars covering about a football field in size. Next to this gigantic temple a  Christian church was built and the ruins are there to see.
Smyrna (Izmir today) was the second city to receive a letter from the Apostle John in the book of Revelation. Acts 19:10 suggests that the church there was founded during Paul’s third missionary journey. Smyrna was 35 miles north of Ephesus.
The church faced strong Jewish opposition in Smyrna. There was a considerable number of Jews in the city from pre-NT times through the Ottoman period. Even today various synagogues are located throughout the modern city. 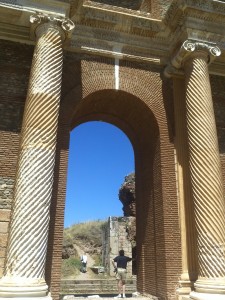 When John said that some will be thrown into prison he knew that Roman imprisonment was frequently a prelude to execution. He encouraged the believers to be faithful even unto death. In this persecution, John’s own apprentice, Polycarp, was martyred here in 155 C.E. An example of John’s warning and exhortation, he refused to blaspheme the Lord’s name and was subsequently burned alive.
Disaster came to the great city under the reign of the emperor Tiberius, when in AD 17, Sardis was destroyed by an earthquake, but it was rebuilt. It was one of the great cities of western Asia Minor until the later Byzantine period.
Tomorrow we drive a couple of hours to visit Thyratira and Pergamum.