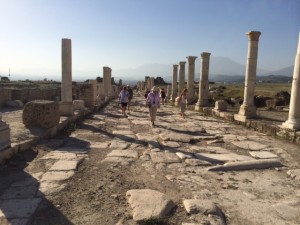 The area that we traveled today was a huge river valley with large mountains on one side and rolling hills on the other. The ancient city of Hierapolis is high on the hillside and Colossae is eleven miles away near the high mountains. Laodicea is at the base of the mountains in the distance. 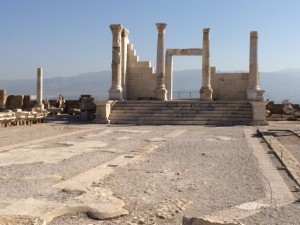 Early in the cool of the morning we drove to Laodicea for Kristy to share a talk with us on this church. We walked around through the ancient Roman-styled city. The Laodicean Church was a Christian community that was one of the early centers of Christianity. The church was established in the Apostolic Age, the earliest period of Christianity, and is probably best known for being one of the Seven churches of Asia addressed by name in the Book of Revelation (Rev. 3.14-22). 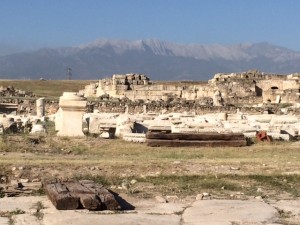 The Christian community in the city seems to have been connected with that of Laodicea and is mentioned four times in the New Testament’s epistle to the Colossians (Col. 21; 4:13,15,16). In writing to the Colossians, Paul the Apostle sends greetings to them through a Laodicean named Nymphas and the church at his (or perhaps her) house (Col 4.15). He additionally greets Archippus, who may also be from Laodicea (4.17), and he instructs the Colossians to exchange his letter with one he has written to the Laodiceans (4.16).
If the Colossian epistle is genuinely by Paul, then this would indicate a Christian presence in Laodicea as early as the AD 50s. It would also indicate that Laodicea (like Colossae) was not evangelized by Paul, but possibly by his disciple Epaphras. The message to Laodicea is one of judgement with a call to repentance. The oracle contains a number of metaphors.
“I wish that you were cold or hot” (Revelation 3:15–16)
“I know thy works, that thou art neither cold nor hot: I would thou wert cold or hot. So then because thou art lukewarm, and neither cold nor hot, I will spue thee out of my mouth.” (KJV).
It is thought  that the Laodiceans were being criticized for their neutrality or lack of zeal (hence “lukewarm”). Based on this understanding, the pejorative term Laodicean is used in the English language to refer to those neutral or indifferent in matters of faith. 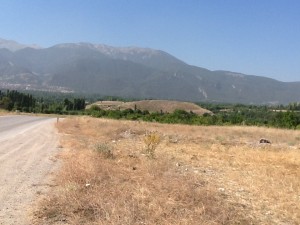 We then drove about five miles to the unexcavated tell of Colossae. It is at the base of the big mountain called Honaz, and as yet has not been excavated. Then we drove a short while to Hierapolis, a huge city on the hillside on the northern side of Lycus River valley.
We stopped for a rest break and found some lovely Turkish towels at an outlet. The group loved the towels, robes, t-towels, etc. I’m not sure how they will get everything home on the plane.
We had lunch at the cafeteria by the ancient pool in Hierapolis. The ancient pool was a sink hole formed after an earthquake.  Hierapolis is located on the calcium bicarbonate rocks of cascades which today is called Pamukkale, which means cotten castle. 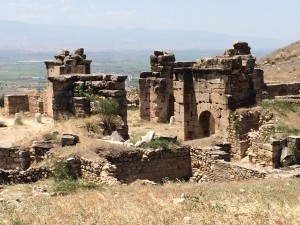 The highlight of that place was the Martyrion of St. Philip the Apostle (disciple). This was a place of pilgrimage for early Christians. The Italian archeologists, Professor Doctor Francesco de Andria has uncovered a church next to the Martyrion recently where he also found the tomb of St. Philip.  They are performing excavations today. 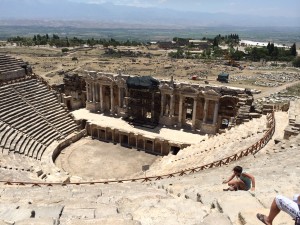 We also saw one of the best preserved theaters from antiquity in Hierapolis. We came back to the hotel early and many swam in the pool. Tomorrow we go to three of the seven churches.