We drove to Delphi today from the little ski town of Aracova that’s perched high in these mountain ranges. The road went straight up to Mt. Parnassus about ten minutes from our Hotel. Most of us knew that we had kind of a “hike” this morning but cleverly our guide, Mitra, just told us that we should follow her “all the way up” and then she would speak to us in the shade. Little did we know that “all the way up” meant hiking almost 1500 feet to the very top level where the ancient stadium was located, probably about a mile. But it was a great bonding experience for the group because we all banded together to go as slow as we wanted (or fast) and everyone but one made it up to this famous archaeological site–which was quite an accomplishment! 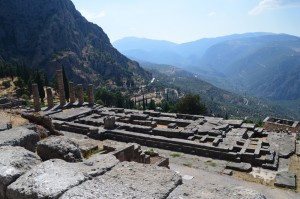 The excavations of Delphi reveal that this site was most likely inhabited as early as 11th century B.C.E. The ruins that we saw were more from the Roman period because Delphi is located on seismic mountain, it has been repeatedly destroyed by earthquakes and also some major wars throughout the centuries. 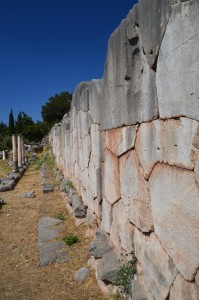 It was pretty ingenious but Mitra showed us the unusual trapezoidal shapes rocks that were the foundations of all the buildings and later explained that this was to help prevent total collapse of the buildings during tremors and seismic activity. During the Macedonian periods (7th-8th century B.C.E.) and also high Greek period, the site of Delphi was a sacred spot–dedicated to the God of Apollo (the God of Sun) after he slew the ancient dragon, Python, who lived there protected the naval of the Earth. Ancient Greeks believed that this spot was literally the center of the world. 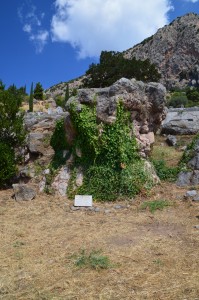 This is also the site of the Delphic Oracle, the most important oracle in the Greek classical world. From ancient times in the early 13th centuries B.C.E. until the late 400’s C.E., the Oracle was sought after by everyone in the ancient world from all over the Greek and Roman empire. Emperors of Macedonia, Greece and eventually Rome, as well as the common people would come to seek her wisdom and prophecies, asking her everything from what wars they should begin, who to marry, what business venture to invest in and other major decisions of state or private lives. It was said that Apollo spoke through his oracle, the sibyl or priestess known as the Pythia who had to be an older virgin woman of blameless life chosen from among the peasants for this sacred life. On special festivals and celebrations of the year, she sat on a tripod seat on a large round rock with an opening in the earth and called up her visions through a trance as she was “inspired.” When Apollo slew the Python, his body fell into this fissure and according to the legend, the fumes of his decomposing body helped the oracle to become intoxicated and fall into a trance. Today, we understand that it is speculated that a gas high in ethylene, known to produce violent trances, came out of this opening, although this is still debatable. Her ravings were then translated by priests and it was up to you to try to translate what she said. However, in the ancient world, the Delphi was highly respected throughout all the major ancient empires–even Egypt. And the ancient city was extremely wealthy, with not only pilgrim money, but also the donations from kings, emperors and wealthier patrons that wanted to show their prestige and wealth and continuously gave their donations through statues, buildings and financed the rebuilding of the temples and such after they were repeatedly destroyed. 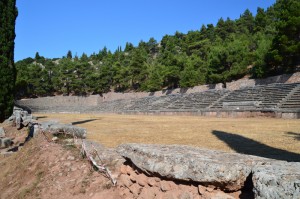 The ancient theatre at Delphi was built further up the hill from the Temple of Apollo giving spectators a view of the entire sanctuary and the valley below. It was originally built in the 4th century B.C.E. Its 35 rows could seat 5,000 spectators. Even further up the mountain was a stadium where chariot races were held. The seats here could hold up to 7,000 people. All of these ruins had at one time been filled with statuary, smaller colonnaded buildings, marble roads and walkways, plumbing, homes, etc. Just a few years ago a new archaeological museum was created to house all the artifacts from the ancient site. We learned that the second most important athletic games were held here, the first being the Olympic games, that started every eight years and then changed to every four years. Even though technically speaking all that the winners received for their winnings were laurel wreaths, they received the highest honors and brought much wealth and honor when they traveled back to their hometown.

After our trip to Delphi, we went into the town of Arachova to find a lunch spot, and then to shop for a little bit. Our group of thirteen found a darling restaurant, but we were the only ones in it. That was true of the whole town. Lots of unique, charming places to eat, but no one eating in them. I’m not sure if that was because it was lunchtime or because the economy was so bad that no one was in the town. Anyway, our lunch included homemade bread, with dips for it, eggplant, lamb lasagne, salad with pomegranate dressing and other delicious dishes. We have all agreed that we have not been disappointed with the food here, it is always fresh, made to order and delicious!

Tonight Kristy will speak to us again about Paul and Corinth, where we will be traveling to in the morning to visit in the afternoon. We saw the harbor where Corinth is located from the site of Delphi. It looks close but we know it will be a trek again back down the mountain.