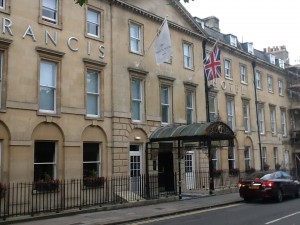 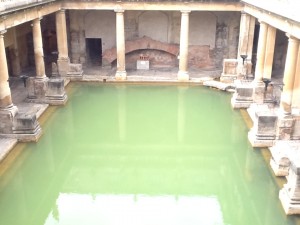 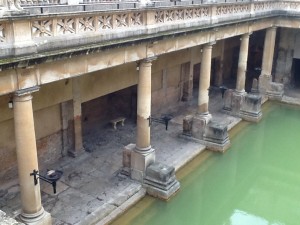 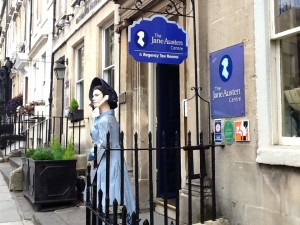 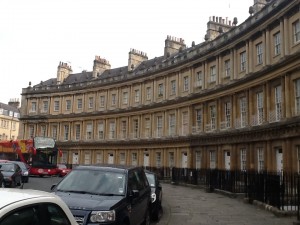 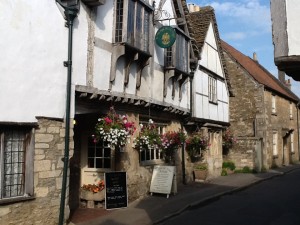 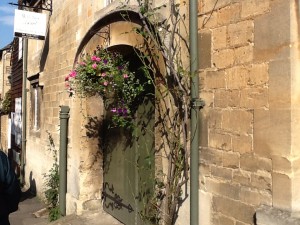 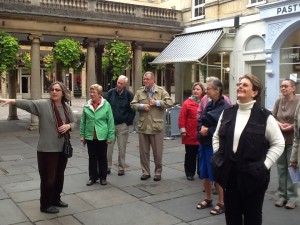 This morning dawned clear and beautiful as we all met in the decorated tea room in the basement of our hotel for a full English breakfast. The hotel, built by the famed architect John Wood, occupies seven of the original 18th century townhouses on the south side of the much sought after neighborhood of Queen Square, right in the middle of Bath. Each room was individually styled–mine had navy blue carpet with dark blue walls and one red wall. The bathroom had checked black and white tiled flooring with a mural of the Roman bath painted on the walls.

Around 8:50 we met in the foyer for a walk to the Roman Baths just steps away. The baths were built after the Romans occupied southern Britain about 43 AD. Over 250,000 gallons of water, naturally heated to 115 degrees, bubbled from three springs in the center of Bath. The Romans channeled the spring water into an enormous stone reservoir to feed the baths. We were able to walk around the extensive ruins of the baths and take pictures.

In the 18th century, coming to Bath to “take to the waters” was the fashionable thing to do. We read so much about this time period in Jane Austen’s novels, especially Northanger Abbey and Persuasion. The very rich would take a morning dip, visit the Pump Room and drink “down” water, take a social breakfast, shop, go out to lunch and then rest before a visit to the Assembly Rooms to attend the theatre or a public ball or a time at the gaming tables. Today people still come to the area to soak or swim in the steaming hot mineral water, believing it will help heal them of some ailment.

After this tour, each of us went walking on their own in Bath. I went to the Jane Austen Center to learn more about that famous author. I also strolled up to The Circus to take pictures. The city, including these beautiful townhouses, was completed in 1766, and also built by John Wood and his son during the mid 1700’s. This perfect circle of houses was inspired by Wood’s interest in prehistoric stone circles and designed to emulate the Colosseum in Rome. Wood also built an 1/2 shaped circle of town homes called The Royal Crescent. Thirty terraced houses dramatically connect with giant Ionic columns that face expansive fields that lead to the hills above the Avon valley. The Royal Crescent has been used as the backdrop of many films and TV shows.

After lunch we drove to an ancient village called Lacock, nestled in the hillsides near Chippenham. Lacock was even mentioned in the Domesday Book, the record of the great survey of much of England completed in 1086 (executed by William the Conqueror).

Lacock was granted a market and developed a thriving wool industry during the Middle Ages. Parts of the village were built in the 13th century, and there are buildings here from every century since, right up to the 18th. The village grew up around Lacock Abbey which was founded in 1229. Nothing has changed about Lacock–every field, house, shop and inn has been preserved as much in its original state as possible or restored. Every house has been given to the National Trust which protects it for the future. Consequently, because of its authentic look and many timeless period homes, the village has been used in numerous TV shows and films such as Harry Potter, Cranford, Pride and Prejudice, Emma, Moll Flanders, Robin of Sherwood, etc. It was a magical place to visit–we felt like we were stepping back into time.