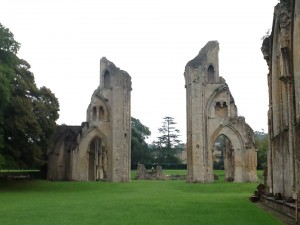 With sadness, we left Dartmouth around 9:00 in the pouring rain and drove for about two hours to the town of Glastonbury. The 12th century Glastonbury Abbey was a rich and powerful monastery for centuries. Surrounded by lovely green fields and grassy areas, we saw the famous Abbey that was destroyed during King Henry the VIII’s reign during the dissolution of the monasteries in 1538. All that stands today are the ruins of this great Abbey. Legends abound around this area about Joseph of Arimathea  and King Arthur. The legend is that Joseph, after giving up his own Garden Tomb to Jesus after the crucifixion and resurrection, was the first to bring Christianity to Britain in 39 AD. There are also innumerable legends and stories built around King Arthur and the Holy Grail. Our guide was quick to tell us that there is actually no historical evidence for King Arthur, however, we all adore the stories and are more than willing to believe. If he did exist, it would have been as early as the 5th or 6th century. 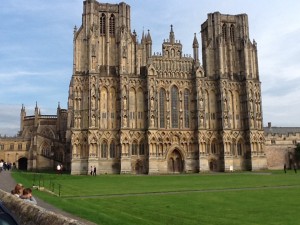 After we walked around a bit and took pictures, we drove to the town of Wells to visit the Wells Cathedral. This cathedral was built between the 12th and 14th centuries and is famed for it’s gorgeous western front. The local guide told us it wasn’t meant to be a Parish church used for baptisms and weddings and the local people, but it was used for the glory of God– to praise and rejoice in Him. They have had a tradition of choir music for centuries. They also have something called ‘the Vicars’ Close, claimed to be the oldest complete medieval street in Europe where forty-two men of this choir were given special housing along this ‘longest continuously lived in road.’ They were and still are noted for their choral music school that teaches young boys and girls today. As we walked around the Cathedral we heard a music student playing “Ode to Joy” on his trumpet out an open window. Music is a huge part of this Cathedral city. 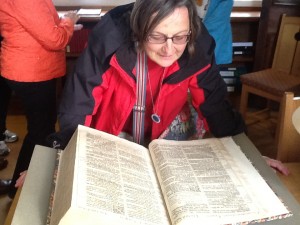 While we were touring the inside of the beautiful cathedral, we were taken upstairs to their library. The guide there told us he did not have an original King James Bible (1611) to show us,  however, they did own a copy of the 1613 King James Bible. He brought it out for us to look through and touch. It was in amazingly good order. We read some of the preface where it talked about how the Roman church would not allow just anyone to read the Bible freely and would do anything to keep the common people from owning or reading it. It made us realize the sacrifice these early Protestant Christians experienced just to give us our English Bible to read. And how we think nothing of that privilege, but we freely exercise it every day.

Our guide Sarah, who has such an amazing British accent, was asked to read a few verses from Genesis 1: 1-6, 26-28. It was so beautiful that many of us had tears in our eyes. The King James Bible is meant to be read aloud, and with her lovely high King’s English, it was absolutely inspirational. 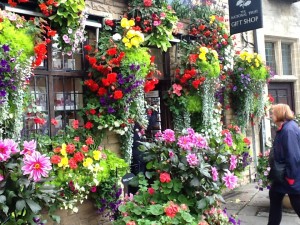 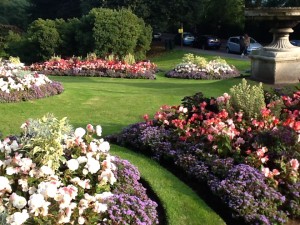 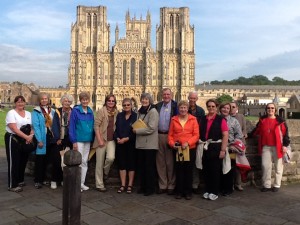 Arriving in Bath, we drove around the city to be prepared for tomorrow. Looking forward to the Pump Room, The Circus, the Roman Baths and Jane Austen.