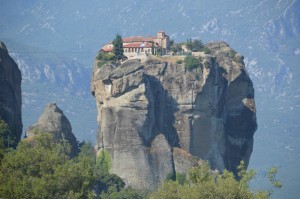 One of the most dramatics sites we have seen on this tour are the monasteries near Meteora. As we’ve made our way south, we’re now face to face with all the mountains ranges of mainland Greece, which are magnificent, yet traveling through the switch-back road system has been a treat! Today, for example, we’ve traveled high up and then all the way down, and then up the side of the mountains and then down again. However, the scenery was breathtaking. 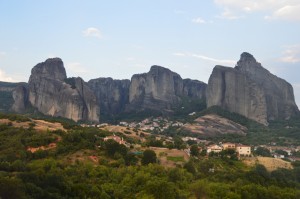 Meteora is a unique set of rock formations that look like giant pillars growing out of the earth–they are massive and steep, the shortest measuring about 1300 feet. The monasteries all are perched high up at the top of these giant pillars of sandstone cliffs and have been there since the 11th century. Meteora means “suspended in the air” and they certainly look like the gods created the landscape–consequently no one really knows or can formulate a theory on how they were created millions of years ago. In direct parallel with these ancient cliffs, how the ancient monks built their monasteries is truly phenomenal with no roads and impossible conditions. 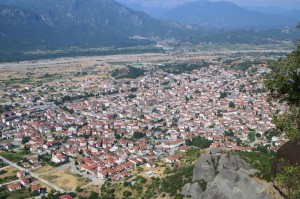 Starting in the 11th century, a religious practice called the ‘eremitic’ (“hermit”) ideal was developed. These early Christians lifted the concepts of retreat, meditation, and prayer to a new level. Before the monasteries, these men climbed up into the crevasses of the high cliffs and lived by themselves, only to come together during Sundays to pray and practice their religious services. Then, the communities started to grow and grow, thus requiring a more sophisticated presence in order to maintain their way of life. Mitra, (our lovely guide), informed us that throughout the 11th – 16th centuries, 200 monasteries were active. Today, there are only 6. And each one has only about 10 monks or nuns living in them together. The rest were abandoned and/or bombed out throughout the wars from the 20th century (WWII and then also the Civil Wars). Almost all monasteries were heavily damaged during WWII because it was suspected by the Nazis that insurgents were hiding in these mountains. If there was a threat to the monasteries, throughout the centuries, all they needed to do was . . . pull their basket up! And they became impenetrable. 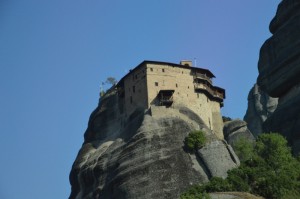 The history of the Varlaam Monastery, for example, is that men were hoisted up vertically alongside the 373 m cliff in a basket with ropes. For 200 years, the site was in ruins. Then two rich priests climbed the summit and began to build a monastery. Using ropes, pulleys and baskets, it took them 22 years to hoist all the building materials up to the top. The construction work took only 20 days. Thirty-five monks occupied the Monastery through the 16th and 17th centuries. Today seven monks live there. 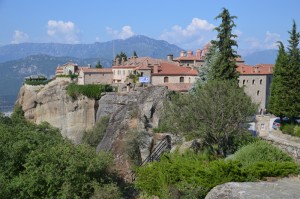 We visited St. Stephen’s Monastery, founded around 1400 C.E., which actually is now run by nuns since 1920. This monastery is by far, the most accessible because there’s a natural “ramp” that allows our bus to pull up right to the entrance. The original foundations of the small church was built in the 1500’s and was decorated with wall paintings from 1545. However during WW II, the monastery suffered greatly from bombs.  The frescos were destroyed by communist rebels later on. In 1961 the nuns began a restoration of this monastery. All of the monasteries are Greek Orthodox and very conservative. They thrive on tourism for their survival but at the same time, in order to visit inside, all the women are required to put on a skirt (no pants or shorts allowed). Of course they had little wrapped skirts that most of us put on together. The requirement for both sexes were that no knees could be showing, out of respect. All the men had to be inspected by the nun at the gate to see if their shorts were too short (and much to all the females disappointment–no men were required to wrap himself in a skirt! Needless to say, IF that had happened, we would’ve all published about hundred photos on the blog documenting that incident!) 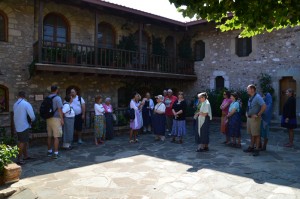