Paul and Barnabas twice visited Perge during their first missionary journey. In 46 AD, according to the Acts of the Apostles, Paul journeyed to Perge from Paphos (in Cyprus) and from there continued on to Antioch (in Psidia), and then finally returned to Perge where he preached the word of God (Acts 14:25). They ‘preached the word’  in Perge before sailing from Attalia to Antioch. Paul and Barnabas and John Mark, Barnabas’ cousin,  probably only stayed a short time, but it was here that John Mark left Paul to return to Jerusalem. On his return from Pisidia, Paul preached at Perge again. 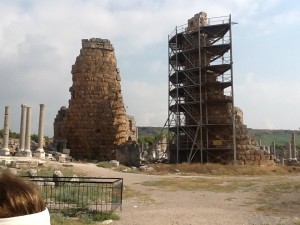 The city today has many streets of Roman ruins including the Hellenistic gates that Paul would have walked through. We also saw the Cardo Maximus with its shops along the sides. In the middle of the long street was the remains of the canal that would have been gushing cascading water down the middle of the street. Along this Roman road we also saw the chariot wheel impressions in the street pavement-rocks.
In the first half of the 4th century, during the reign of Constantine the Great, Perge  became an important center of Christianity, which soon became the official religion of the Roman Empire. It was a Christian center through the 5th and 6th centuries. 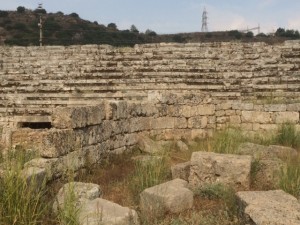 Side (pronpunced sid-day) is one of the best-known classical sites in the country. Alexander the Great took the city in 333 BC and introduced Hellenistic culture. The Roman general Pompey in 67 BC brought Side under the control of Rome. Eventually it was a part of Galatia in 25 BC. It was always a large slave-trading center and a foothold of the pirates.
The ruins of Side include a huge Roman city along with a large 20,000 seat theater. The ancient city was constructed on a peninsula with three ports on the three sides, and Paul very well could have landed in Side and then moved on. 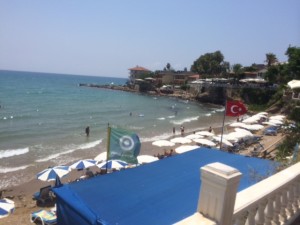 Antalya  or Attalia in the Bible, became part of the Roman Republic in 133 BC. Christianity started to spread in the region after the first century. Antalya was visited by Paul as recorded in Acts. “From Perga, Paul and Barnabas went down to Attalia and sailed from there to Antioch after preaching in Pisidia and Pamphylia” (Acts 14:25-26). It also developed into a large Byzantine city.
Today both Side and Antalya are modern sea resort cities with around 12,000,000 visitors (mostly from Germany and Russia and other European countries).