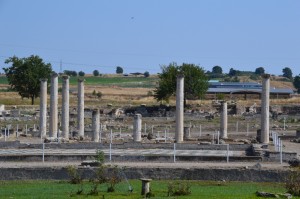 Today we hopped on the bus early to start our drive south. Our first stop was almost an hour away in Pella, which was the capital of ancient the Kingdom of Macedconia founded in 399 B.C.E. We drove through our first encounter with flat countryside in Greece! There were furtile fields and farming and some views looked like the middle of Illinois it was so flat. But the site of Pella used to be a port in ancient times but throughout the centuries, the marsh lands have been drained and sea has receded. King Philip II, one of the most powerful kings of his time, had his palace in Pella and from the founding of the city by King Archelaus in 399 B.C.E. till about 168 B.C.E. when it was sacked by the Romans, the city flourished as a very wealthy harbor city. It is also important because it’s Alexander the Great’s birthplace, (King Philip II is Alexander’s father). The city was in such decline after a devastating earthquake that by 180 C.E., the city was practically deserted and forgotten until about the 19th century when European excavations helped to start the process of uncovering the massive ancient city ruins. 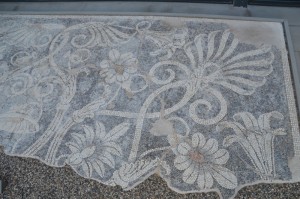 In Pella, we saw a wonderful museum that highlighted their findings and discoveries and put into more context the conquests of Alexander and the immense wealth of the ancient Greeks who lived there. The actual site itself is still being excavated (when there is money available), so there is not that much to see except some evidence of mosaics that are specific to this region. The mosaics are unique because instead of carving out stone or glass (like the Romans because Greeks did not ever figure out how to make glass), they used small pebble-like stones to create their mosaics. There were only about 7 colors they used because of the natural colors of these tiny rocks. These mosaics exemplified a high level of craftsmanship because of the skill and the time it took to make them. 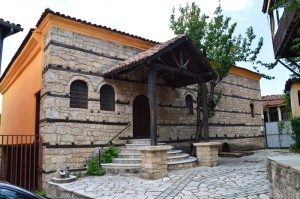 Our next stop was the town of Veria, (the ancient city name is Berea) where Paul and Silas preached to the Jewish and Greek communities in 50 or 55 C.E. It was pretty special because we were invited to a tiny synagogue in the ancient former part of the Jewish ghetto, and the local magistrate opened up the synagogue just for us. We have learned that throughout all of Greece there are very little Jews left. For example, in this town, there were about 50,000 Jews before they were all round up to the concentration camps in 1940. Only 1 Jewish family is left and this is why the synagogue we visited is not in use. It was an old and tiny synagogue built probably around 1830’s/1840’s but they know for sure it was built on top of the ancient ruins of an older synagogue. Was this the synagogue Paul went to first when trying to find receptive thought in his time? It could be very likely. Kristy briefly shared the story in Acts of Paul and then we continued on our way to our next and final stop of the day, King Philip II’s tomb. 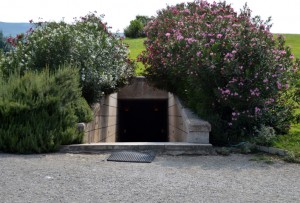 We drove about another 45 minutes or so through the town of Vergina, where the tomb of King Philip II is located. It is a large mound set into the ground and was discovered by a famous Greek archaeologist  Manolis Andronikos in 1977. He unearthed what he claimed was the burial site of the kings of Macedon. The tomb itself has been renovated into a small museum that houses the artifacts discovered and also some of the tombs discovered. There were 4 tombs represented, one of them said to be King Philip II’s tomb and another proposed to be his grandon’s tomb, the son of Alexander the Great, who after he died, his son was murdered as a teenager along with his mother because Alexander’s generals did not want his descendants to come to power. The artifacts they discovered were exquisite – the gold laurels and other marble carvings to decorate the tombs were so realistic and life-like. It was really fun to see.

Then we continued our 3 hour bus ride into the mountains to make our way to stay at Meteora. Tomorrow we visit one of the famous monasteries at the top of the cliffs of Meteora mountains.