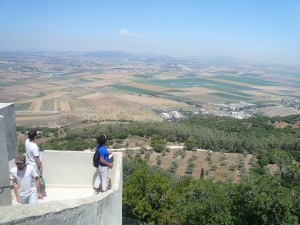 Our first site of the day was Mt. Carmel on the southern side of the Valley of Jezreel.  We could not  see the Mediterranean Sea in the west about 35 miles away because of the haze, but the entire valley of Jezreel was a glorious view before us, so spectacular that we could clearly see a 180 degree panarama of the farm fields with golden grain, the orchards, the palm trees and banana plantations and so much more. Both Old and New Testament Bible history has taken place here. This is the probable place where Elijah challenged the Baal worshipers to a contest establishing the fact the “Lord, He is the God, the Lord, He is the God.” After Kristy’s talk on Elijah, we stood and sang Hymn #1, “Be thou Oh God, exalted high!” It was so moving. 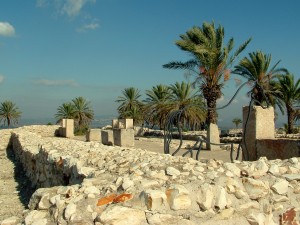 One of the large sites near Mt. Carmel is “Tel Megiddo”. A ‘tel’ is a large 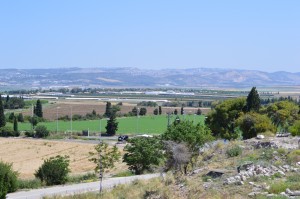 man-made mound of earth where cities have built and rebuilt on top of each other over thousands of years.  There are literally thousands of tels in the Middle East that have not been excavated, probably hundreds of thousands. Archaeologists have spent years excavating Tel Megiddo, a huge Old Testament site, that stands over the entrance to the Valley of Jezreel. This is one of the strongest military fortresses in Bible history. It governed the trade routes through this area and it was the entrance to the pass so it was always defended militarily. It’s history covers the time from 7,000 B.C.E. to the 1900’s.  Many strategic battles were fought at the base of Megiddo, and it is supposedly the place where “Armageddon” will be fought in the future. Kristy’s talk on the thought behind what we can take from Armegeddon and Megiddo as Christian Scientists was wonderful. 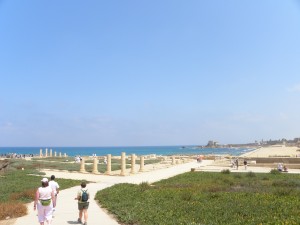 Finally, we drove to Caesarea Maritima, one of the most sophisticated ancient cities, engineered by Herod the Great.  Herod was a genius builder and built a port that extended out into the ocean to break the water where no natural barriers exist. Archeologists today are still amazed that Herod’s engineers used a special mixture of lime and volcanic ash to create the massive underwater stones for the foundation that are waterproof. The port was recorded by Josephus as being one of the most important trade routes, rivaling even Cleopatra’s Alexandria in the ancient world. Excavations of Herod’s city has uncovered a hippodrome, a theater (used for performances today), Herod’s seaside palace, as well as wealthy homes, an aqueduct and many other remnants of the city. Caesarea Maritima was where Peter baptized Cornelius, one of the first Gentiles to be accepted as a Christian.  This is the city where Paul was imprisoned for a few years before being taken to Rome for trial.  The Ecclesiastical Library at Caesarea was supposedly one of the grandest of its time, containing 30,000 manuscripts., including extant literature, early gospels, etc. Eusebius, an early Christian writer, used this library to write his “Ecclesiastical History of the Christian Church, Vol. I and II, at the request of Constantine in the 300’s C.E. This city is also the location of the 1961 discovery of the Pilate Stone, the only archaeological item that mentions the Roman prefect Pontius Pilate by whose order Jesus was crucified. It is likely that Pilate used it as a base, and only went to Jerusalem when needed.

We saw a film on Caesarea that showed what the city was like from Herod’s day to the present, how it had gone through the Muslims, the Crusaders, etc. and how today it is a thriving Jewish city built on top of the ruins. Now we are heading to our hotel in Natanya to spend the night before taking the plane home. It’s been an amazing journey. All of us here have learned so much and experienced so much but most importantly we have all had our hearts open to a deeper meaning of the Bible. To see the Holy Land for oneself is such a special gift. We’ve made great friends as we’ve traveled together and are grateful for so much. But most importantly, we are grateful for this opportunity to find a deeper, spiritual meaning of this ancient land.

We thank all of you who have been joining us by reading our daily blogs. Obviously it gives a taste of what we have experienced but nothing is like coming on a trip to experience it yourself! It’s definitely a “once-in-a-lifetime” opportunity! Thanks for being here with us though and hope at some point, we see you on a trip to the Holy Land.