After the larger part of our group arrived at the airport in Tel Aviv,  we got on our tour bus for the day’s travels. The first thing we did was drive to Jerusalem and pick up the five people at the Dan Hotel who left yesterday. Then we all were ready for our day of touring.

The first site we drove to was Qasr el Yahud, a possible site of John the Baptist’s place of baptizing. Many scholars believe the he used this area on the Jordan River for his work, including the baptism of Jesus. The location for tourists has been completely refurbished and is a beautiful place to sit and ponder, as Kristy gave a wonderful talk on the Baptism to us.

The students went down to the Jordan River and put their feet into the muddy rushing stream. It’s an extremely intimate place. You can literally throw a stone across the banks and it would be in the country of Jordan. I think most of us imagine the Jordan River to be like a USA river, maybe the Mississippi; however, it is more like a creek to us. It travels from the North, where three or four rushing streams come together, through the Sea of Galilee and flow all the way down to the Dead Sea. 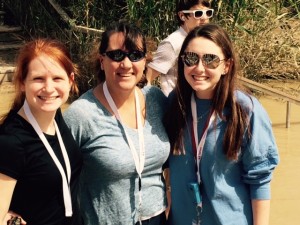 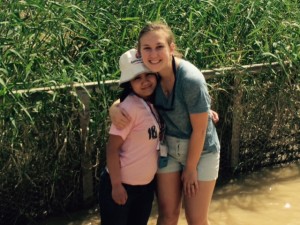 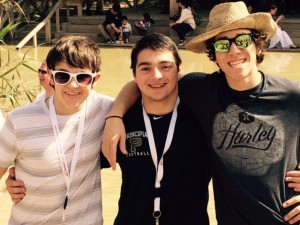 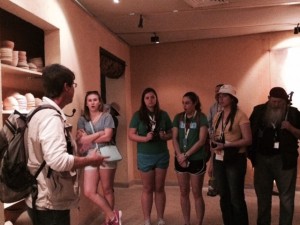 Next we drove south down the eastern side of the country until we arrived at Qumran, the location where the Dead Sea Scrolls were discovered. It is located on a dry plateau about a mile inland from the northwestern shore of the Dead Sea. Many scholars believe it to be the home of a Jewish sect called the Essenes. We walked the site and took pictures after watching a film telling about its history.

Our next stop was a lookout point to view the waterfall and gorge of the oasis of Ein Gedi where David hid out from King Saul. We could take pictures and see the cave in the distance where tradition says David cut off the hem of Saul’s cloak.

Then we drove about 30 minutes further south to a resort at the Dead Sea where our group could test what it is like to swim in one of the saltiest lakes in the world. The Dead Sea boasts about 32% salinity and is about 9.5x saltier than the ocean. There is so much salt and minerals in it that you float. One can hardly put your feet down into the water because you are so buoyant. You don’t  even have to tread water, you stay on top like a cork.  The water feels oily and light, and when you walk out in the middle and look down, you can see the bottom which is white with salt crystals. The Dead Sea is the lowest place on the surface of the earth, about 1500 feet below sea level, and not one bit of life lives in it, thus the name “Dead Sea.” Here we stayed in a lovely Hotel right near the water, called “The Daniel Hotel.” 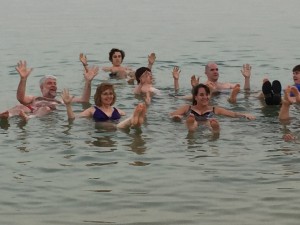 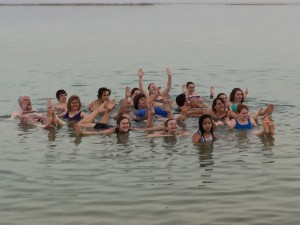 Tomorrow we get up early to be the first ones in line up the cable car to see Masada.