Ephesus had the magnificent Temple of Artemis or Diana – one of the Seven Wonders of the Ancient World. See model below. It was 4 times larger than the Parthenon. 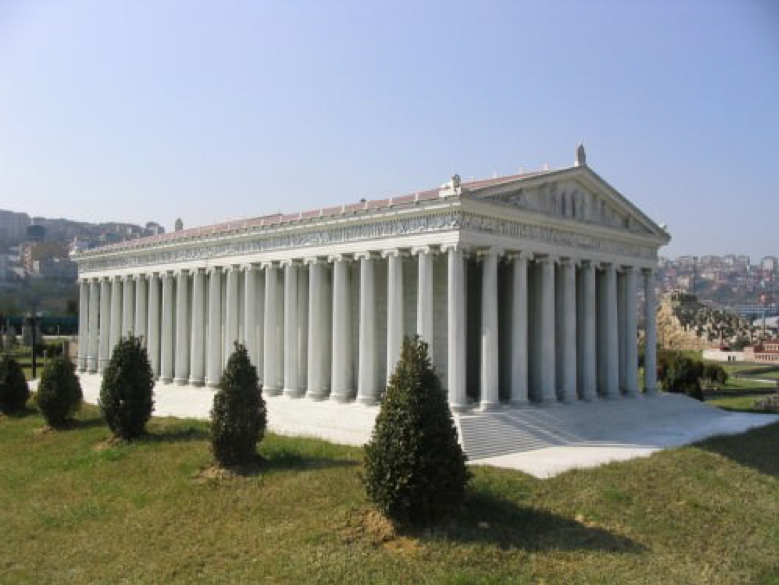 Mary, Jesus’ mother, may have retired her, and Paul spent much time in the city. The site is vast, but only about 15% of the site has been excavated. The Celsus Library, the 3rd largest in the Roman Empire was a highlight.
A discovery – carved on its steps is a menorah – the 7-branched candlestick – a symbol that many Jews lived in the city – as many as 10,000.
The theater was a magnificent site. To measure the size of a city, archaeologists measure the seating of a theater and multiply by 10. This theater seats 25,000, and the estimate of Ephesus’ population – 250,000.
This is where a riot took placed where the people shouted for 2 hours, “Great is Diana of the Ephesians.”
Special insights: Paul was here for 3 ½ years. The effect of his missionary here was the decline in the worship of pagan gods. It was so effective that he was having an impact on the economics of the city. Those who made little statues of Diana were losing money because of his preaching.
The letter in Revelation refers to this church’s ability to hold firm and resist the oppression of paganism. They did not give in to the pressure. However, they had left their “first love.” They had become spiritually apathetic. No more “hearts burning within” – church had become ritualistic. How can we revive our enthusiasm for church?