Focus: God commands the ravens to feed Elijah by the brook Cherith, (found in Section 2 of this week’s Bible Lesson from the Christian Science Quarterly).

Article from the Christian Science Sentinel: “Christian Science the Scriptural Healing,” by Myra Emmons. To read this article, click here to login.  Also, JSH-Online subscribers can view the article through the following link:  https://sentinel.christianscience.com/issues/1910/3/12-28/christian-science-the-scriptural-healing

Excerpt: “Elijah had warned King Ahab of the drought that should come upon him and his people because of their disobedience, . . . but Elijah’s implicit obedience to the commands of God preceded each of his demonstrations. When told that the brook Cherith should supply him with drink and that the ravens should feed him, he went unquestioningly to the place to which God sent him; he allowed no mortal sense to lead him to reject the perception of the fact that Love was able to sustain him, even in the wilderness.” (CSS, March 12, 1910)

Article from the Christian Science Sentinel: “Trustful Obedience,” by Elizabeth E. Souza. To read this article, click here to login.  Also, JSH-Online subscribers can view the article through the following link:  https://sentinel.christianscience.com/issues/1908/4/10-32/trustful-obedience

Excerpt: “Again, in time of drought, when Elijah was told to go to the brook Cherith . . . . in trustful obedience he went forth, . . . . Thus we find that all who ‘caught glorious glimpses’ (Science and Health, p. 333) of the truth, saw it as a result and reward of unselfish, trustful obedience; . . . . With this example before us, together with the unswerving obedience to divine Principle of our revered Leader, how can we be indifferent to the great importance of obedience?” (CSS, April 11, 1908)

1  What is the meaning and significance of Elijah’s name (v. 1)?

5  What is the significance of Elijah being fed by ravens (v. 4)?

6  What does this story teach about obedience?

8  How does this account of Elijah being sustained at the brook Cherith relate to this week’s Bible Lesson, “Spirit”?

Painting: Saint Elijah Fed by the Raven, by Lazzaro Baldi 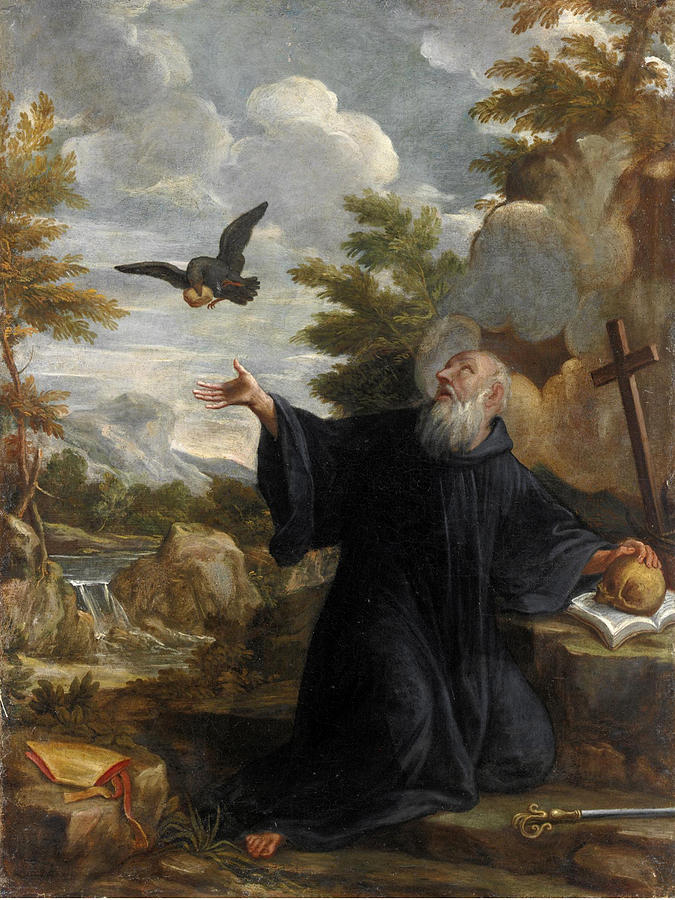 (note: citations in green are from this week’s Lesson)

“Elijah was the first great prophet of the northern Kingdom of Israel. He is identified with the period in Hebrew history in which the prophets began to appear as dominant figures to combat widespread apostasy [total departure from one’s faith or religion, a total desertion of faith] and raise the ethical standard of Israel’s religious worship. . . . During this period of almost total apostasy the great prophet Elijah suddenly appeared to pronounce God’s judgment of Ahab’s sinful conduct.” (Shotwell, p. 118)

“In reviewing this period one might well pause in contemplation of the character and experiences of Elijah, so fully did they interpret the inner meaning of Israel, and so clearly did they indicate its utter oppositeness to materiality. Although Elijah belonged entirely to the northern kingdom, and contributed not a word to the sacred literature of the Hebrews, he has been regarded as the greatest of the prophets, and took his place in the thoughts of the Jews as the forerunner of the Messiah. He was the link between the law and the gospel, since it was he who appeared with Moses on the mount of transfiguration. His remarkable work betokened a nearness to God, and a comprehension of the spiritual facts of being, which are not encountered elsewhere between Moses and Christ Jesus. Here was an Israelite indeed, not because of birth or residence, but because of his close acquaintance with the God of Abraham, an acquaintance which enabled him to expose the iniquity of the carnal mind and the illusion of its gods.” (Greenwood, p. 161)

1  And Elijah the Tishbite, who was of the inhabitants of Gilead, said unto Ahab, As the LORD God of Israel liveth, before whom I stand, there shall not be dew nor rain these years, but according to my word.

“In those dark times God raised up a light, the prophet Elijah. Reared in rugged Gilead, Elijah was a rugged individualist, a man of stern character and countenance, zealous for the Lord. Elijah sought Ahab and delivered the Lord’s pronouncement.” (Expositor’s, p. 138)